Investor Alfred Terry Bacon was the namesake of Bacon Lake

Bacon Lake is located a short distance northeast of Berthoud and may be easily seen from the intersection of Bunyan Avenue and old Highway 287 (north 1st Street). The namesake of the lake was Alfred T. Bacon, a real estate investor who once owned the quarter-section of land where part of the lake and Greenlawn Cemetery is now located. 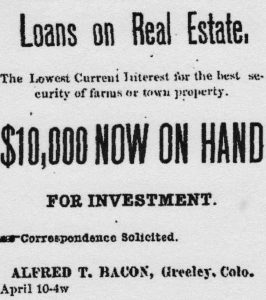 Early area residents like William Turner—the son of Berthoud town founder Peter Turner—referred to the body of water “old mud lake.” The Turners were familiar with the lake because their homestead bordered the section of land where the lake was located.

In a newspaper account of the last cattle round-up in the Little Thompson Valley in 1879 William Turner recalled, “I got permission from my father to use one of our work horses for the next day. Our team was turned out to grass at nights, so my first job in the morning was to get up a horse to ride. At the peep of day I started for old Mud Lake where I knew the horses would be.”

By 1890 old Mud Lake had come to be known as Fellers Lake, presumably because of a land owner by the name of Fellers.  Town of Berthoud records indicate that in August 1890 a committee was appointed to “investigate the cost of making a ditch from Turner’s lake east of the Berthoud Farmers Milling & Elevator Company to Fellers Lake.” What remains of “Turner’s lake” is a drainage pond that may be seen on the west side of the 500 block of 2nd Street. “Fellers Lake” or present-day Bacon Lake was located about a half-mile east of Turner’s Lake.

At some point in the 1890s the quarter-section of land on which the southeastern section of the lake and Greenlawn Cemetery are both located, came into the possession of Denver real estate investor Alfred T. Bacon.  What is known about Mr. Bacon comes from his 1901 obituary.

Upon Bacon’s passing the Denver Republican newspaper recounted, “Alfred Terry Bacon, a prominent citizen of Denver was found writhing in agony in City Park, Denver, Tuesday and was taken home and died that same night. Mr. Bacon has been represented in this city in the loan business since 1886 by Horace T. DeLong. He was from a prominent eastern family, his father having been professor of Greek at Yale University for many years.

“Mr. Bacon was forty-nine years old. He was a son of Leonard Bacon, for several decades professor of Greek at Yale university, and famous as an abolitionist in ante bellum days. Several of Mr. Bacon’s brothers have won reputations as writers on theological and scientific subjects. Mr. Bacon’s courses at Yale were supplemented by courses abroad, but at the completion of his education his health compelled him to come to Colorado. HeHe

He was a member of the faculty of Colorado College for a time, and took to outdoor life, ranching in the Laramie plains, at which time he wrote a series of wild animal stories for an eastern magazine.

“Later he removed to Colorado and organized the New England Livestock Company which at one time had large herds of cattle and horses on the plains east of Greeley. Mr. Bacon in the early eighties became convinced of the solid nature of investments in Colorado irrigated lands. At that time money was scarce in this state, while in New England people were seeking investments at low interest rates. Hundreds of thousands of dollars of this eastern money was entrusted to Mr. Bacon who invested it in mortgages on Colorado farms. He traveled over the entire irrigated region, investigating all the conditions, and so carefully were the mortgages placed that in the hard times of 1893 his clients suffered hardly a loss. Mr. Bacon provided money by which thousands of acres in the vicinity of Greeley, Loveland, Boulder, Fort Collins, Buffalo and Wheatland, Wyoming, Rocky Ford, Grand Junction, and Delta, Colorado, North and South Parks and many other places were equipped with the necessary machinery and livestock to make them productive, and thus he played really an important part in the development of the state.”

In December 1900—six months prior to his sudden death—Alfred T. Bacon sold the farm upon which the lake that bears his name is located. The quarter-section (Section 13, Township 4, Range 69) did not include 10 and 7/10  acres where Greenlawn Cemetery was located. The sale to I.M. Johnson, a fellow investor, was transacted at a cost of $6,000.