By Mark French
The Surveyor 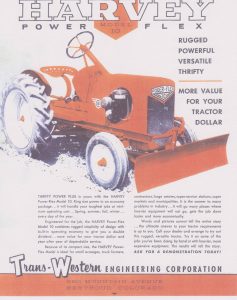 In 1958, Wilber F. Gibson built Harvey garden tractors in Berthoud. Gibson’s manufacturing plant, the building that currently houses the Grace Place church at 250 Mountain Ave., was erected by Ted Scheierman in 1947. Scheierman was a farm implement dealer who also sold General Electric appliances and Goodrich tires. Gibson moved his business into the building in 1958.

Gibson began building tractors in Seattle, Wash., in 1945. Because there was a rush to get tractors to farmers following World War II, Gibson used several automotive components to build a brawny garden tractor that he named the Gibson Model A. Only a few tractors were produced in Seattle before the company moved to Longmont, Colo., where new, non-union businesses were welcome.

Over the next few years the Gibson Model A was joined by D, E, H and I series. In 1948, a full-size tractor, the Model H, came into production. Gibson’s company also secured government contracts to build forklifts, cranes and airplane tugs, and did so until February 1952 when a lawsuit between Gibson and the government caused the plant to close. Work resumed two years later when the company was reorganized.

In 1958, The Berthoud Bulletin announced Gibson’s arrival. In July the newspaper noted, “A new industry has been busy getting its facilities ready for operation in Berthoud. W.F. Gibson, manufacturer of Gibson Tractors, has a crew setting up production machinery in the George Gehrlein Building (formerly the Ted Scheierman building). Mr. Gibson said Tuesday that he expects to begin production operations about Aug. 1.

“The operation in Berthoud is only one phase of the company’s operation. Implements which will be used with the tractor will be manufactured in Longmont.

“Mr. Gibson said that it was not possible at this time to say exactly how many will be employed in the Berthoud plant but that he does expect there may be about 20 men working when the plant goes into full production.”

In Berthoud, Gibson commenced the production of the Harvey tractor. The origin of the tractor’s name is unknown. In collecting circles it is assumed that less than 60 Harvey tractors were produced before Gibson’s death in March 1959.

Upon Gibson’s death the Berthoud newspaper reported, “A massive cerebral hemorrhage claimed the life of W.F. Gibson at 8:30 p.m. Wednesday at the Longmont Hospital. He was stricken at 4:30 p.m. at the Power Flex Company, 250 Mountain Ave. in Berthoud. He had just returned to the factory when he suffered the attack.

“Mr. Gibson, who was in his late 40s, had been suffering of a heavy cold during the week but otherwise was apparently in good health. Last July M. Gibson came to Berthoud and organized the Power Flex Company which was in the process of manufacturing a small tractor and implements. He and Mrs. Gibson made their home in Longmont. Surviving him are his wife, Gladys, his mother who lives in Seattle, Wash., and three children by a former marriage. Mrs. Gibson is a sister of Lee Williams of Longmont and an aunt of Stan Williams of Berthoud.”

The Harvey Power Flex tractor, nearly identical in appearance to the Gibson tractor, was produced in Berthoud for less than a year. Today, the tractor is a Holy Grail of sorts for collectors of Gibson tractors who appreciate its rarity.