By Mark French
Tales of the Little Thompson 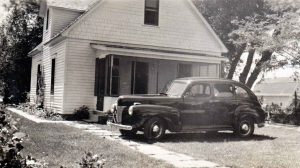 The home of Berthoud’s day marshal, Ross Haworth, was targeted by thieves in June 1932. Haworth and his wife bought the house at 725 W. Welch Ave. earlier that year for the sum of $1,500. On the evening of the crime wave, Berthoud’s night marshal was L.O. Rockwell. Photo courtesy Berthoud Historical Society, A. Haworth Collection

Times were hard in 1932. America was at the depth of the Depression, and little farm hamlets like Berthoud felt its full effect. Gasoline, in particular, was an expensive commodity that was highly sought by thieves. In June 1932 the Berthoud Bulletin recapped a late-night crime spree that resulted in the theft of items including gas. In 1932 the nation was filled with unemployed men who needed transportation, and stealing gasoline for their automobiles was one of the only ways to drive to a place where there might be a job.

On June 23, 1932, the Berthoud Bulletin reported: “Sunday night or early Monday morning thieves made a general raid on the garages on Welch Avenue, taking gas and other articles. At the McBride hotel (406 Welch Ave.) they got gas and a saw, Mrs. Mary Kropp’s garage (628 Welch Ave.) was entered where a gas and a screwdriver were taken. W.G. Albrecht lost gas and a lap robe to the thieves and at the C.G. Pollock place (739 Mountain Ave.) they took gas and a spotlight.

“Marshal R.C. Haworth (725 Welch Ave.) was awakened by prowlers and ran out in time to see them going down the street, east, in a car which he thought was his but found later that his car was in his garage. Walt Newman’s car (717 5th St.) which was parked in front of his house lost a spare tire to the thieves.

“About 3 o’clock Monday morning Night Marshal Rockwell saw two men backing a car through the alley back of the Dave Windnagel place (749 4th St.), and closed in on them, ordering them to halt. As they seemed to be rather reluctant about obeying he backed his order with a shot from his revolver which changed their minds right now. Ross H. Jacobs (726 5th St.) who heard the shooting went out to investigate and assisted the marshal by frisking the men for weapons, and later calling out Police Magistrate Davis.

“The two men arrested who gave their names as Harold Johnson and C.N. Neal of Lafayette were jailed, but were released Monday morning. They confessed that they had been planning to steal gas saying that they wanted to get enough to take them to North Park where they hoped to find work. Both were flat broke so fining them would do no good, so they were released.

“A short time ago Marshal Rockwell caught two young fellows attempting to steal gas from the Paul R. Stranahan place (549 4th St.). They said they were intending only take enough to get them to some place or other, so were released, given some gas and told to be on their way. A number of Berthoud car owners had had gas siphoned from their cars while parked in recent weeks.”

The situation in Berthoud worsened by fall when the Berthoud Chamber of Commerce appeared before the town board and requested funds for feeding transients who passed through Berthoud and asked for food. On Oct. 13, 1932, the newspaper noted, “Supplying the needs of penniless drifters has become a burden to many of the business-houses, more especially the grocery stores, the restaurants and the bakery. The Rev. Bell, at the commissary, has been feeding as many as he is able, using his own funds and small donations from other individuals and organizations to supply the needed food.

“The board appropriated $25 for the purpose for which it was asked. Mr. Bell has what is known as cook-up boxes or rations. In each package are a small piece of bacon, potatoes, onions, sugar, a little coffee, and a bread ticket—enough to tide the hungry wayfaring man over for several hours. The recipient, if he is wise to the way of the road will go to some sheltered spot, build a fire, and cook a good substantial meal.”