The cement bench at the northwest corner of Fickel Park honors Tex Woodrum. The bench was placed there after his death at the age of 85 years in 1978. The last line in his obituary that was published in the newspaper read, “Those who wish may make contributions to the First Presbyterian Bell Tower Memorial Fund or the Fickel Park Bench Memorial Fund.” It is not presently known if contributions were made in his name to the bell tower fund but there is no doubt that he was memorialized with a bench (still standing) at the northwest corner of Fickel Park.

Otis “Tex” Woodrum was a resident of Berthoud from 1939 to 1978. Born in Purdy, Missouri, a small town in the foothills of the Ozarks, in 1893, he saw duty in the United States Navy during World War I. 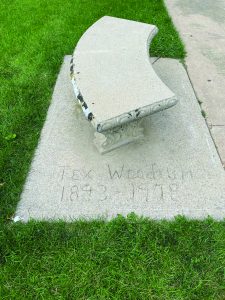 Photo by Becky Hemmann – A bench that honors the memory of Tex Woodrum is located along the pathway in the northwest corner of Fickel Park. Woodrum based a trucking business in Berthoud from 1939 to 1954.

In September 1933, the 40-year-old Woodrum was in Colorado where he married Margie Sheppard in Longmont. Miss Sheppard had been a country school teacher in the Fort Collins area before getting married. From 1934 to 1939 the couple owned and operated a gasoline filling station on Trilby Road south of Fort Collins.

In 1939 the Woodrums moved to Berthoud, Colorado, where they lived in the house (still standing) at 630 8th Street.  In Berthoud Woodrum operated the Woodrum Trucking Line, a business based on a contract to haul bagged cement and plaster to the Denver area.

In late 1941 or early 1942, the Woodrum’s purchased the home (still standing) at 615 7th Street. The house became available when its occupant, a dentist by the name of Garrelts was called into military service. Built by Morley Fairbairn in 1916, the house was an American Craftsman-style bungalow in one of Berthoud’s best tree-lined neighborhoods.

Berthoud historian, the late Helen McCarty-Fickel, later recalled, “During the time the Woodrums lived there, Mrs. Woodrum took pity on a poor math teacher at Berthoud High School who was living with his family in a shack near the tracks. She took him and his family (including four children) in and allowed them to live in the basement rent-free for a time.”

In June 1942 Woodrum purchased the old Moon Theater building (still standing) that had been constructed at 342 Massachusetts Avenue in 1916 by Berthoud businessman John C. Shull. Woodrum filled the theatre’s incline seating area with dirt in order to create a level floor in the building that he used to store his trucks. The building served this purpose until Woodrum retired from the trucking business in April 1954.

During his nearly four decades in the community Woodrum belonged to the First Presbyterian Church of Berthoud, Berthoud Masonic Lodge No. 83 A.F. & A.M., the Berthoud American Legion and the Loveland VFW. He died at the Colorado State Veterans Nursing Home in Florence on December 30, 1978. He was survived by his wife and the families of his children Jana and Tom.

The bench at the northwest corner of Fickel Park honors the memory of Tex Woodrum, a World War I Navy veteran who was closely identified with two of the town’s historic structures—the Morley Fairbairn house at 617 7th Street and the Moon Theater at 342 Massachusetts Avenue. Woodrum was laid to rest in Berthoud’s Greenlawn Cemetery.