Automobiles raced and wrecked on Kelly and Windnagel hills 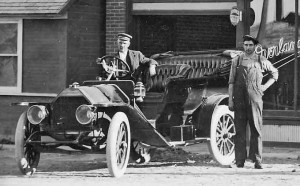 Sim Jefferes (left) and Ed Wray (right) were among the Berthoud men who raced up Kelly Hill in 1917. Today their makeshift race track is a heavily traveled segment of Highway 287 southwest of Berthoud.
Photo courtesy of the Berthoud Historical Society

Most people are unaware that the hills on Highway 287 between Longmont and Berthoud were known to the area’s early residents as Kelly and Windnagel hills. Kelly Hill, the northern-most hill, begins at the bridge over Dry Creek and heads uphill south toward the intersection of the highway and West County Road 6. Windnagel Hill, the southern-most hill, begins at the bridge over the Little Thompson River and heads north up the bluff past the historic barn on the Malchow farm.

Both hills were named for landowners whose properties bordered the present-day highway. Neither Len Kelly’s nor David Windnagel’s houses remain standing, but in 1917 they were notable landmarks. That year, events that occurred on Kelly and Windnagel hills earned mention in the Berthoud Bulletin.

In the fall of 1917, Emery Bashor and Ed Wray operated the Bashor & Wray Ford Agency at the corner of Fourth Street and Mountain Avenue in Berthoud. The gravel road between Longmont and Berthoud — and up Kelly Hill — was yet to be paved. Bashor and Wray were in their mid-30s, but still adventurous enough to make a sport of automobile racing.

On Sept. 14, 1917, the Berthoud Bulletin noted, “An event in local sporting circles was the little series of automobile races on Kelly hill one morning—the first of the week—when Em Bashor, with a Ford and Curt Hess, in his Overland, raced for the top of the hill for a consideration–$50. The start was made from the culvert in the valley. The Ford shot away from the starting point on high, and the Overland on intermediate, gearing as they maintained till the finish of the quarter-mile course up the steep hill road.

“Hess won. Then Sim Jefferes got excited and raced Mr. Bashor but lost. Ed Wray’s nerves got a-tingling, and imagining himself a Barney Oldfield, got at the wheel of his Ford and made a run for it, but came out second. Both makes of cars made a good showing, and everybody felt happy—even though one of the racers was shy fifty dollars.”

A few months later, on Dec. 28, 1917, Windnagel Hill made headlines in the local newspaper when the Berthoud Bulletin reported, “The highway at the foot of Windnagel Hill was the scene of a bad mix-up of automobiles in which all participating cars were damaged.

“I.J. Doke was returning to Mead Tuesday night between 8 and 9 o’clock in his Chalmers when he met Ray R. Matthews of Loveland, secretary of the Larimer County Milk Condensory. Mr. Matthews’ car, an Oakland, was making a run for the hill with lights glaring so that Mr. Doke was unable to see the approaching car when it swerved in the road directly in front of Doke. The big cars collided with an energy that put both in decidedly bad order. To make the confusion worse confounding, Arthur Waggener, following behind the Chalmers entered his Scripps-Booth in the free-for-all. Harlan Hankins, following the Oakland in his Jefferay, came near making the collision a tie, but was warned in time to save his machine with which he later towed the Waggener car to the garage. But, doing that service, the Jefferay refused to go, and it took a lot of tinkering to get it natural again. Happily, no one was injured.”