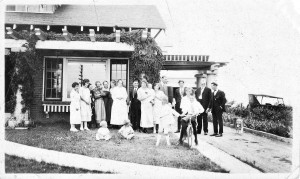 Ed McCormick constructed a fine brick bungalow on his family’s farm north of Berthoud in 1917. A large group of McCormick’s friends and family are show shown in this photograph that was taken in the 1920s. McCormick and his father, W.H. McCormick, operated a general store near the corner of 3rd St. and Mountain Ave. in the town’s early years.
Allen Collection, Berthoud Historical Society

Members of the William Hamilton McCormick family played key roles in the development of the Berthoud community. William “W.H.” McCormick came to the Little Thompson Valley to preach for the United Brethren church in the early 1870s. At that time only a handful of homesteaders populated the area. In the 1880s, McCormick left the ministry, staked his own homestead claim, and opened a hardware store in the fledgling town of Berthoud. McCormick’s son Ed worked as the store’s bookkeeper and was a stalwart of the Berthoud business community until 1935 when the store was sold. Ed’s wife, Carrie McCormick, helped establish several Spanish-speaking churches in Northern Colorado, including one that was located in an adobe building on the McCormick farm north of Berthoud.

W.H. McCormick came to the Colorado Territory in 1870. He taught school in Arapahoe County for two years before he joined the United Brethren church and became a “saddlebag preacher” in the Cache la Poudre, Big Thompson and Little Thompson valleys. In the 1880s McCormick left the ministry, filed a homestead claim, and opened a small hardware store in the recently-relocated town of Berthoud. In 1892, he moved his family to the house at 609 Fifth St. in Berthoud where he was close to his store and the United Brethren church in which he was still active. He retained ownership of his farm north of Berthoud after he moved to town.

Ed McCormick was born on his parents’ homestead north of the Berthoud in 1885. He graduated from Berthoud High School in 1904 and then moved on to Indianapolis, Ind., where he attended a business college. In 1908, Ed married Carrie Kitts and brought her back to Berthoud where they established residence in a home that was located at the northwest corner of Fifth Street and Mountain Avenue. The house is no longer standing.

In 1917 Ed and Carrie McCormick built a fine brick bungalow on the family farm north of Berthoud. The Whitfield family that operates Canyon Mechanical Heating & Air Conditioning now occupies the home that the McCormicks built at 2128 N. First St.

The photograph that accompanies this article shows a large group of people assembled in front of the McCormick home in the 1920s.

Like Ed, Carrie was the child of a minister. With her husband, Carrie was active in Berthoud’s United Brethren church congregation and a moving force in the local chapter of the Women’s Christian Temperance Union (WCTU). She was also the founder of Berthoud’s first Camp Fire Girls organization in 1914.

In the late 1920s Carrie was drawn to the ministry of evangelist Aimee Semple McPherson when a Foursquare Gospel team held a revival meeting at Berthoud’s United Brethren church. In 1931 she followed a calling into that ministry when she organized a Spanish Foursquare congregation in Berthoud. She constructed a small adobe church building in the yard south of her house and actively recruited a congregation made up of migrant families that had been brought to the region by the Great Western Sugar Company. The success of her Berthoud church led Carrie to establish churches in other communities that included Milliken, Longmont, Frederick, Brighton, Eaton, Greeley, Trinidad and Denver.

When Berthoud’s Evangelical United Brethren (E.U.B.) congregation moved to a new church at Ninth Street and Lake Avenue in the 1950s, Carrie and Effie Williamson obtained their former place of worship for the local Spanish Foursquare congregation.

Houses and church buildings are but part of the McCormick’s Berthoud legacy. A business, scouting and community organizations, and a church congregation that remains active in the church at the corner of Fourth Street and Mountain Avenue are also part of that heritage.