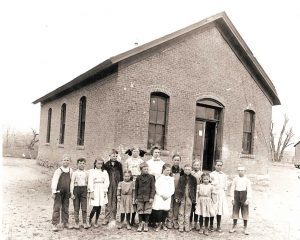 Old Berthoud School” located on the Little Thompson river bottom was constructed in 1883. The original school district split into two separate districts the year prior when a dispute arose over the location where a new school building should be constructed.
Photo courtesy of the Berthoud Historical Society

The first school district to be organized in the Little Thompson Valley was Larimer County District No. 13. The district, originally known as “Little Thompson” was formed in 1874 and encompassed a large area that extended a few miles in each direction from the homestead of Lewis Cross on the Little Thompson river bottom. (The Cross homestead was located one mile directly south of present-day Berthoud.) More school districts were formed in the area over the next few years, including Blore (1877), Lone Tree (1880), Sunnyside (1880), Red Rock (1882) and Whipple (1883).

Dist. No. 13 came into being on Oct. 15, 1874, when local residents paid a $5 fee to the Larimer County School superintendent, Clark Boughton, for “Sitting <sic> off new School District No. 13.” The first year the three-person school board was manned by Cross, Henry Krueger and George Cronk. Seventeen students attended classes in a small log cabin on the Cross homestead that served as the community’s school, church and meeting place. The identity of the school’s first teacher is unknown.

In 1877 the Colorado Central Railroad laid its tracks through the Little Thompson Valley and along the eastern boundary of the Cross homestead. Two years earlier Cross had submitted an application for a post office at a cluster of buildings on his homestead, informally known as “Little Thompson,” and he was appointed postmaster. When the track was laid past Little Thompson in 1877, railroad officials gave the fledgling settlement the name “Berthoud” in honor of Capt. Edward L. Berthoud, the engineer who had surveyed the route of the railroad.

In the early 1880s it was apparent that Dist. No. 13 needed a larger, modern school building. A dispute arose when residents living on the river bottom let it be known the new school should be built on the old school site. Those living on the bluff north of the river bottom maintained the new school building should instead be located in their neighborhood.

As a result, the residents of the river bottom seceded from Dist. No. 13 to create a new district that was identified as Dist. No. 22. What remained of the original district, several sections located on the bluff north of the river bottom, retained the identity of Dist. No. 13. Both districts proceeded to build new school buildings.

That same year, Dist. No. 13 built a new, frame school building at the southwest corner of the intersection of present-day Larimer County Road 10E and old Highway 287 (current site of B&J Storage). For reasons presently unknown, the new building was named the “Mars Hill School.”

After Berthoud was moved from the river bottom to its current location in the winter of 1883-84, children living north of Thompson Street (present-day Mountain Avenue) walked a mile north to attend classes at the Mars Hill School, while children living south of Thompson Street walked a mile south to attend classes at Old Berthoud.

When a school was finally built in the town of Berthoud in 1887, the Mars Hill building was moved to the present-day Campion area where it was used by Summit School Dist. No. 54. After that time, children living in the country north of Berthoud walked into Berthoud to attend classes at the school in town. The school, razed when the school that once stood in Fickel Park was built in 1894, was located on the east side of the 500 block of Sixth Street.