William Lyon and George Kee were responsible for building the first two-story, red brick business “blocks” in Berthoud. In 1905 and 1906 the men financed the construction of the Kee & Lyon and Masonic buildings at the southeast corner of 4th Street and Massachusetts Avenue. Lyon was a former shoe store owner from Longmont and Kee was a dairy farmer-turned real estate investor. Together they raised the money behind the building projects that intended to turn Massachusetts Avenue into the town’s business center. Their dream was initially successful but when Mountain Avenue was paved in the 1920s automobile traffic shifted the small town’s economy to that thoroughfare. 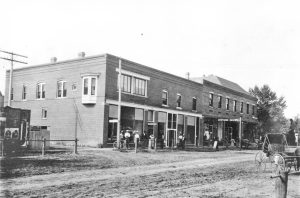 Photo courtesy of Berthoud Historical Society – William Lyon’s Berthoud Bakery was located in the east ground floor room of the Masonic Building in 1906. The life of the bakery was four years.

In the fall of 1905 Lyon and Kee purchased a frame house that sat on four lots at the southeast corner of 4th Street and Massachusetts Avenue. The house, originally built by businessman Daniel Mahan but occupied by butcher Harvey McClung, was moved to the north end of Berthoud.

In October of that year excavation for the foundation of a two-story, 60’ by 65’ pressed brick business building with “plate glass fronts” got underway. The building was filled with various businesses by February 1906. Known as the Kee & Lyon Building, the building fronted Massachusetts Avenue with its east side bordering the alley. One of the partners, William Lyon, briefly occupied the middle of three ground floor rooms where he operated the Jacobs & Lyon store that had “a bakery, grocery and shoe stock.”  In June 1906 the Jacobs & Lyon partnership was dissolved. The room once occupied by Lyon and his partner later became a meat market.

Before the Lyon & Kee Building had been completed, excavation for the foundation of second business block next door to the west got underway. Initially identified by the local newspaper as the “new Kee and Lyon block,” the building became known as the Masonic Building when the second floor of the building became the domain of the local Masonic lodge in 1906. When the new building was ready for occupancy, Lyon and his son Billy, opened a bakery in the east ground floor room—one door west of Lyon’s original business in the Kee & Lyon Building. Their enterprise came to an end in March 1910 when Lyon rented his storeroom to a gentleman from Golden who planned to operate a bakery and lunchroom in the space.

When William Lyon rented his storeroom in 1910 he was 63 years of age. His son Billy with whom he had been in partnership relocated to Fort Collins where he took a job with the Larimer County Clerk. The elder Lyon, who had built a fine home at 961 4th Street in 1905, pursued retired life at home while operating a shoe repair business in William Lynch’s harness shop.

In September 1932 the Berthoud Bulletin mentioned Lyon’s former place of business when it announced, “Relief agencies are planning to establish a commissary in Berthoud—in the William Lyon building formerly occupied by the Berthoud bakery. The commissary will be stocked by the county and the Red Cross. Plans are being worked out for helping the worthy needy direct, and ways will be opened whereby those physically able may help themselves, partially at least. The Rev. J.G. Bell who so ably handled the relief work last winter will likely be in charge of the Berthoud commissary.”

William Lyon, a native of Germany who immigrated to America at the age of 19, died at his home in Berthoud in 1933. At the time of his passing he had been a resident of Berthoud for 28 years.