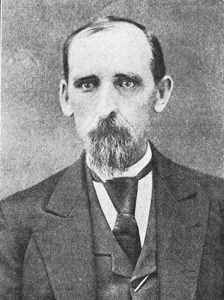 Ish Reservoir is located between Berthoud and Longmont. It can be seen on the east side of Highway 287 near the Larimer-Boulder county line. The reservoir holds irrigation water drawn from the Little Thompson River by the Boulder and Larimer County Irrigation & Manufacturing Ditch Company. The ditch company, the first in the area, was organized in 1875. One of its founders, Capt. John C. Ish, was a Confederate Army veteran who became a cattleman. Ish was one of the men who helped develop the Little Thompson Valley in the 1870s and ‘80s.

John Carroll Ish was born in Saline County, Mo., in 1839. The son of a slave holder, Ish studied at William Jewell College in Liberty, Mo., prior to his enlistment in the Confederate Army in 1861. By the time the Civil War ended in 1865, Ish had risen to the rank of captain. He continued to be known by that title until his death in 1912.

Ish was wounded in battle seven times while fighting for the Confederacy. One of his wounds was inflicted in March 1862 at the Battle of Pea Ridge, Ark., when a bullet pierced his groin and caused him to linger between life and death for several months. (Also known as the Battle of Elkhorn Tavern, the bloody two-day fracas secured Missouri for the Union and opened Arkansas for Union occupation.) During the war Ish was also captured and confined in a Union prison camp at Alton, Ill.

Following the Civil War, Ish, a 27-year-old veteran, entered the cattle business. In 1866 he led a cattle drive from southern Texas to Independence, Kan., and blazed a route that became known as the Ish Trail. Three years later, in 1869, Ish and a crew of five cowboys drove 150 choice heifers across the plains to the open range of the Buckhorn Valley west of present-day Loveland. The herd was driven to the foot of the Rocky Mountains at a time when the threat of American Indian hostilities made the 90-day drive a harrowing experience.

In 1875 Ish returned to the Little Thompson Valley and, with his brother-in-law, John W. Everhart, purchased James Eaglin’s prime 320-acre river-bottom ranch. The men divided the ranch that was located about a mile west of the original Little Thompson settlement into two 160-acre parcels. That year Ish and Everhart were also among the group of men who organized the Boulder and Larimer County Irrigation & Manufacturing Ditch Company to bring irrigation water to the southern slope of the Little Thompson Valley. The reason the company’s reservoir is named after Ish is not presently known.

Over the next few years Ish and Everhart attended to their Little Thompson Valley farms while developing mining and ranching interests on the Western Slope. In 1881 Ish moved his herds to North Park but continued to live seasonally at Berthoud until 1890 when he relocated his entire operation to North Park. In 1910 Ish closed out his herds and moved to Fort Collins where he lived until his death in 1912.

Capt. John C. Ish was among the Civil War veterans who helped tame the Little Thompson Valley in the 1860s and ‘70s. Their war experiences inoculated them against hardship and provided them with an indomitable spirit that made the raw prairie of the valley their blank canvas. When things got too tame in the 1880s, Ish moved on to North Park to explore other opportunities. After surviving the Civil War, no challenge was too daunting for Ish.