Berthoud kidnapping and robbery in 1893 made news across Colorado 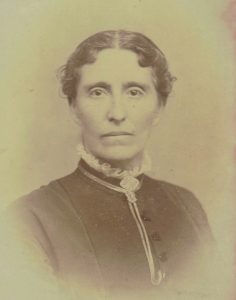 Photo Courtesy of Berthoud Historical Society – Mrs. Phebe Knapp was one of 31 early residents of the Little Thompson Valley featured in the “Pioneer Edition” of the Berthoud Bulletin on September 7, 1901. Her kidnapping by a farmhand in July 1893 made news across the state of Colorado.

The kidnapping and robbery of Mrs. Phebe Knapp made news across the state of Colorado in July 1893. Mrs. Knapp lived on a 160-acre farm northeast of the present-day intersection of Highway 287 and the Berthoud Parkway (Larimer County Road 17). Her second husband, a man with the surname Knapp, was a harness maker by trade who left for long periods of time to prospect for gold. Mrs. Knapp did most of the farm work herself, but also hired farmhands to help when needed. When she was kidnapped and robbed in 1893 she was living by herself.

On July 21, 1893, the Loveland Leader newspaper reported, “The people of Berthoud were intensely excited Wednesday morning when it was learned that Mrs. Knapp had come into town in a partly demented condition and reported having been drugged and robbed. Nothing reliable could be obtained from her on account of her hysterical condition.

W.H. McCormick, who is Mrs. Knapp’s son-in-law, and Constable Willis Pulliam, drove out to the farm as soon as possible and found evidences of robbery. The beds in the house were not disturbed, and the doors were all locked. The whole affair is shrouded in mystery. The old lady was in town the evening before, and it is known that she did not have a great amount of money about the house.

Those who know her best say that she could not have hitched the horse to the buggy as it was when she drove into town early in the morning. She says she found herself lying on the back porch, and the horse hitched to the buggy and tied to the fence. Those who have investigated think she was driven over the country the greater part of the night and left to find her way home in the morning.

Suspicion rests upon her hired man, who was in town with her the evening before, and who now has not been heard of since. Officers are searching for him and it is to be hoped that the guilty parties, whoever they may be, will be brought to justice, as the crime was certainly villainous in the extreme.”

Days later the Fort Collins Courier added, “Early Wednesday morning Mrs. Phoebe Knapp, who at present resides alone on her farm north of town, drove up to the residence of W.H. McCormick, corner of Fifth street and Massachusetts avenue. She was in a bewildered condition and was suffering from various bruises about the body. Dr. Cole was summoned and after being quieted she related that on Tuesday evening she and a farmhand employed by her, William Bridges, ate supper as usual, and that she remembers being served a cup of coffee by Bridges, and after supper going to the porch to rest. From that time until Wednesday morning all is a blank—she remembers nothing. There is a good deal of mystery surrounding the matter but the following facts are known: That a gold watch and between $7 and $8 are missing, and that Bridges, the hired man, cannot be found or heard of, although constable Pulliam and others put in all day Wednesday and Thursday trying to find some trace of him. Mrs. Knapp employed two hands, her husband being away on a mining trip, but discharged one and retained Bridges, and the generally accepted theory is that when Bridges saw money in the hands of his employer, he decided to obtain it, and consequently put some sort of drug into her coffee, waited until she was unconscious and then ransacked the premises and decamped.”

A Loveland newspaper later speculated that Bridges put the unconscious Mrs. Knapp in her buggy, drove toward Greeley and then after turning the horse around and starting him home, left on foot.

Bridges was eventually located, charged with the crime of larceny, and arrested. His case—The People vs. William Bridges—was tried in court at Fort Collins. The result of his trial is not known but it is likely that Bridges spent time at the state penitentiary for his bold escapade.