The 2021 Berthoud Day parade is scheduled to begin at 11:00 a.m. on Saturday, June 5. While concerns regarding the COVID-19 pandemic have diminished over the past months, the 2021 version of the local celebration will focus solely on the parade and bypass the traditional activities held at Town Park. 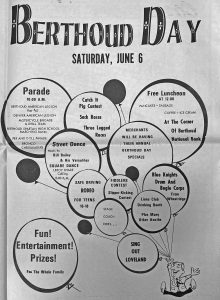 The assembly point and route of the 2021 parade will remain as it has for many years. In 1970, however, the Berthoud Day parade route began at the Methodist church at west edge of town and wended to the Berthoud Town Hall at 328 Massachusetts Ave. Unlike the modern event, the 1970 parade continued the tradition an annual Pet & Doll parade that began in the early 1940s.

Prior to the 1970 Berthoud Day parade the Berthoud Bulletin newspaper announced, “The annual Berthoud Day celebration, sponsored by the Berthoud Chamber of Commerce and Berthoud National Bank will begin with a parade at 10 a.m., Saturday, June 6.”

The newspaper continued, “Entrants in the Pet and Doll portion of the parade are to assemble at the A&W Drive Inn at 9:00 a.m. The Berthoud Woman’s Club and Boy Scouts will assist with dividing of the groups and attaching American flags (donated by the American Legion) to the children’s entries. All children between the ages of 3 and 12 years old inclusive are invited to enter their pets, tricycles, bicycles and decorated wagons and may dress for the occasion.

All other parade entries will assemble at the United Methodist Church where the parade is scheduled to begin. The parade will proceed past the Rest Home [Grand View Manor at 855 Franklin Avenue] to 8th Street, up 6th Street to the highway where the Pet and Doll portion will join in. They will then proceed down Mountain Avenue to 3rd Street, and on 3rd Street, to Massachusetts and on to Massachusetts to 4th Street.

Pet and Doll entries will fall out between the Library and scale on Massachusetts for judging and prizes. The Fire Belles will distribute tickets redeemable at the pop stand at the end of the parade.  The remaining parade entrants will disband at 4th and Massachusetts.”