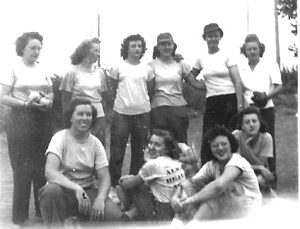 The ball field at Berthoud Town Park was busy during the summers of 1943 and 1944 even though local men that once played competitively on the field were away fighting in World War II.  In 1943 Alma Starck and Elvera Carlson organized a women’s softball team that competed informally against teams from Loveland and Fort Collins. When dusk forced games to be completed after dark, cars lined up along first and third base lines and switched on headlights to provide illumination for the final innings. According to Starck there was little else to do in Berthoud during the war so the softball games were attended by large crowds. After servicemen returned from the war, they began playing competitive team baseball again and women’s softball dwindled.

After the servicemen’s return, a campaign was mounted to raise money to purchase lights and build a grandstand at the Berthoud Town Park ball field. In 1946 Berthoud’s American Legion chapter sponsored a fundraising drive that collected more than $750. Holes were dug and light poles erected by community volunteers by the start of the 1947 season. Even though a grandstand had yet to be constructed, men’s baseball returned to its status as the town’s main sport.

By 1947 the park was becoming the heart of the Berthoud community. In August 1947 the Berthoud Bulletin noted, “The Berthoud Park is becoming a popular place for local residents as well as tourists. Fire places and tables with benches, beckon to those seeking a place to picnic in full relaxation.

“Vern Johnson has worked hard and with sheer persistence to beautify Berthoud’s Park. Trees that were planted a number of years ago, area now taking on good growth—a nice carpet of grass helps to enhance the appearance of the park, and flowers blooming in an array of colors, also attracts the eye. We are told that Mrs. Bryant, president of the War Mothers, has had a hand in some of the flower planting.

“Everyone is cognizant of the fact that it takes work, hard work, to accomplish what has been done at the park the past several years, and since Mr. Johnson has the streets to keep in repair, help with pipe breakages, which are numerous at this time of year, and the many other duties he has to attend to, one wonders where he finds the time to work in the park.

“Entering the park from the east, one can view a pretty sight when the four o’clocks are in bloom. Their striking colors lend much beauty to that portion of the park. Vern Johnson did the planting work.

“The ball park with its flood lights now in operation, also does its share toward adding to this attractiveness and the up-and-coming spirit of this community.

“The forepart of this week, a group of people, numbering about forty in all, from the state of Illinois camped at the local park. With their tents set up, it looked as though a city was coming into its own.  The visitors were very generous with their praise concerning the town of Berthoud and its nice facilities.”

More was in store for Berthoud Town Park. On Sunday, October 12, 1947, the Berthoud chapter of War Mothers added a sense of solemnity to Town Park when they unveiled a stone monument (still standing) that honored the local “boys and girls of World War II.” The unveiling ceremony was attended by over 200 people and included addresses by Evangelical United Brethren minister Howard Hines and state War Mothers president Leitha Kraxberger.

Beginning in 1948 Berthoud Town Park was the site of a Labor Day weekend “Flapjack Day” celebration that drew thousands of visitors to town. Flapjack Day remained the Berthoud Chamber of Commerce’s main event until 1958 when it was discontinued. Other community events at Town Park included Future Farmers of America (FFA) junior fairs, and Chamber of Commerce Easter Egg hunts.

Berthoud Town Park is destined to be redesigned and re-purposed for modern usage. In existence for more than 80 years, the park will always hold a place in the hearts of residents who remember it as the hub of their home town.