A unique bed and breakfast opens in west Berthoud 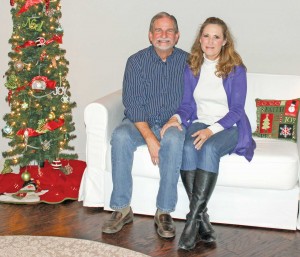 Berthoud’s Bob and Debra Kouns pose for a photo in the living room of the Silo Bed and Breakfast near Berthoud.
Heidi Kerr-Schlaefer / The Surveyor

When Bob and Shirley Kouns bought the 121-year-old Deinis farm in west Berthoud 16 years ago, Bob had his builder eye on one particular outbuilding. It was an extra-large, extra-deep silo built in 1932 to house silage. He immediately began working out on paper how to turn the silo into an apartment.

“This is a silage silo, as opposed to a grain silo. The other silo on the farm is a grain silo, and you can’t do anything with that,” said Kouns, a residential building contractor. “The silage silo is 20 feet on the inside, and its size is what gave me the idea.”

The idea sat on the back burners of Bob’s mind for years, but after Shirley, his wife of 44 years, passed away, he began working on the project as a way to work through his grief. He had decided he was going to turn the silo into an apartment for himself and rent out the house he and Shirley had lived in. But fate, or in Bob’s opinion, God, had a different plan in mind. 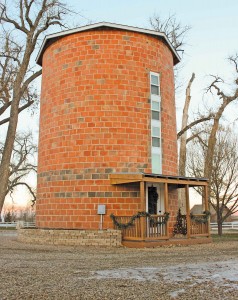 The Silo Bed and Breakfast is a new unique addition to Berthoud.
Heidi Kerr-Schlaefer / The Surveyor

Bob met Debra, and the two had an instant connection. Bob showed Debra his silo project on their first date, and she was impressed; after all, he was doing the entire renovation by himself, an impressive endeavor. The two later married and it became obvious that the silo apartment wasn’t going to be big enough for two, so they began brainstorming other ideas for the nearly completed, three-story apartment.

A friend, who is a travel agent, thought the silo would make an excellent bed and breakfast, and the Silo Bed and Breakfast was born. The Kounses opened the doors for business this past September and their reputation has already gone international. Two ladies from South Africa were their very first guests.

The build-out of the old silo took three years. The three-story apartment has a full kitchen, living room, and half bath on the ground floor. The second floor is a bedroom featuring a king-size bed and full bathroom. The loft area, just above the bedroom, has a desk and two comfortable chairs for watching the flat screen television that’s mounted across from the loft, high on the bedroom wall. 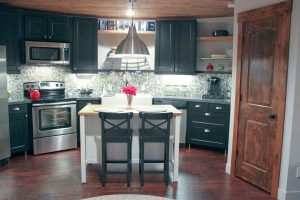 The Silo Bed and Breakfast offers an updated interior within the unique setting of an old silage silo.
Heidi Kerr-Schlaefer / The Surveyor

Modern interior design touches blend seamlessly with family and farm heirlooms. For instance, antique farming equipment found on the property is mounted on the bedroom wall as repurposed art. The quilt on the bed was started from a square that Shirley had quilted, and the mirror in the bedroom-bathroom came from Debra’s family’s farm in the Midwest.

The kitchen is contemporary with modern conveniences, and the apartment is equipped with Wi-Fi. The blend of history and present day into the décor of the Silo Bed and Breakfast was important to the Kouns. Bob sees the silo as a way to keep the history of the old farm alive; a history that’s significant to Colorado’s agricultural heritage.

Very few repurposed silo bed and breakfasts exist in the United States, and neither the Kounses nor the Surveyor staff, were able to locate any others in Colorado.

Bob and Debra are excited about their new venture together. They are now working to put their new bed and breakfast on the map. Debra also has plans to pursue marketing the farm and silo as a wedding venue. There have already been weddings held on the beautiful farm, including the Kouns’. A few more upgrades to the property are in the works, including an outdoor fireplace to be built next summer. 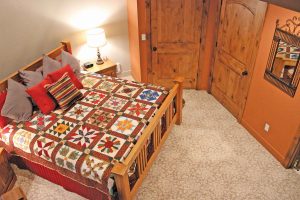 Sleeping accommodations are second to none at the Silo Bed and Breakfast.
Heidi Kerr-Schlaefer / The Surveyor

Rates at the Silo Bed and Breakfast are $250 a night and include a continental breakfast served in the silo kitchen. You can find the bed and breakfast online at www.SiloBedandBreakfast.com, on Facebook at www.Facebook.com/silobb, or reach them by phone at 970-215-2969.