Da Bean to change hands Jan. 25, new name to be revealed next month 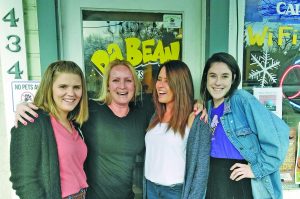 The owners of Jo To Go wanted a new coffee shop opportunity and the owner of Da Bean Coffee House wanted to sell.

Tiffany Heywood, co-owner of Jo To Go, with her daughter, Amanda Thorstensen, purchased Da Bean Coffee House from Jennifer Harris and will be the owner of the downtown Berthoud coffee shop with Amanda and her daughter, Emily Thorstensen. Harris’s last day will be Jan. 25, when she will close the coffee shop at noon.

“I wanted it to go to somebody who’s going to carry on that local family-friendly vibe,” said Harris. “I knew they had a coffee shop here, so I knew it would be a perfect fit.”

Heywood and the Thorstensens will take the month of February to renovate the coffee shop at 434 Mountain Ave. and plan to reopen it in early March under a new name. They will have a logo release before that day but are not yet ready to reveal the new name.

“It’s going to be a surprise, and we’re going to explore something slightly different than what we are already doing,” Amanda said.

Heywood, who lives in Berthoud, opened Jo To Go in 1996 and sold it in 2001 to stay at home to raise her four children. The drive-thru coffee and ice cream shop, 429 Meadowlark Dr., changed ownership several times until 2008 when Heywood purchased it again.

“I needed a job, so I bought a job,” Heywood said. “It was for sale, and it was a really good deal not to pass up.”

Amanda, who lives in Berthoud, took over operating Jo To Go in 2018, while Heywood took a year off to travel.

“I got bored and looked for other career options, but I can’t stay away from coffee,” Heywood said about wanting to return to the coffee business.

Harris, who bought Da Bean in March 2010 after working there for six months as a barista, wanted to sell the coffee shop to stay home with her two children, ages 12 and 10, while her husband Brent travels for work.

“I got to the point where I needed to be here fulltime or home fulltime,” Harris said.

Harris approached Amanda in December 2018 to let her know she was selling Da Bean, appreciating how Jo To Go was liked by locals and “had a happy feel to it.”

“I wanted to try to keep that feeling here,” Harris said. “I’m excited that they are buying it. I’m excited it’s going to carry on.”

Amanda and her family plan to cross-brand Jo To Go with Da Bean, keeping some of the same offerings but bringing in a few changes. They also plan to retain the staffing as much as they can — Da Bean has 18 on staff, while Jo To Go has six.

“It’s exciting to try something new within the realm of what we’ve already done. We want to keep it a destination for people,” Amanda said. “We want to add our own flavor to the mix but keep the same vibe.”

Heywood wants customers to be surprised when she and the Thorstensens reopen the coffee shop with a “twist on something that’s been a staple in the community,” she said.

The coffee shop will have a new color scheme and feature some other changes to the interior’s appearance. There will be some of the same offerings as Da Bean, such as the artist of the month, monthly open mic nights and coffee with a cop and coffee with the mayor.

“It’s going to be fun and hip,” Heywood said.

Heywood and the Thorstensens will provide a reward system and revamp the menu with vegetarian, vegan and traditional items. They do not want to reveal exactly what they will be serving but will offer breakfast and lunch items and a full espresso menu.

Their opening date will depend on the time it takes to finish the renovation, but they are aiming for March 1. They plan to operate the coffee shop during similar hours to Da Bean but will open at 6 a.m. instead of 6:30 a.m.

“It’s just something new, and it’s super exciting,” said Emily, who lives in Fort Collins. “My family is crazy about coffee shops, and I’m no different. It’s our dream to do it together.”

Harris said she will miss owning and working at Da Bean.