One year later, Karspeck is adding restaurants and expanding his app to include even more services at Berthoud Marketplace, 648 Welch Ave. 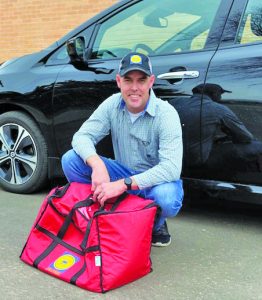 Courtesy photo – Mayor WIll Karspeck started a food delivery service in Berthoud as a local alternative to some of the national companies.

“I actually had the idea before COVID, and COVID was the ignition and now is the time to do this,” said Karspeck, 35, owner of Berthoud Marketplace and mayor since 2018. “It’s a local alternative to DoorDash and Amazon, and it keeps funds in town.”

Berthoud Marketplace is similar to national delivery companies DoorDash and Grubhub and Colorado companies Noco Nosh, Easy Eats and Warrior Xpress Delivery. Customers order restaurant food and other products from an app or website, and the delivery company picks up the items and makes the delivery.

But unlike those companies, Karspeck doesn’t take out a percentage of the cost of the food and other items and simply charges a delivery charge and processing fee. He realized some restaurants couldn’t make the service work for them and had to increase their costs, take a cut to their profit margins or drop the service entirely. He wanted to help Berthoud restaurants get out their products in additional ways beyond restaurant seating, pick-up orders and curbside services.

The businesses put Karspeck’s placards by their registers, and they have the option to call in orders directly to him or send their customers to his app or website. He delivers within an eight-mile radius that includes Berthoud and adjacent Weld and Larimer county areas.

“Folks want to have Main Street right at their fingertips. Even if you’re not close to town, you can get food delivered,” Karspeck said.

Karspeck’s delivery time ranges from 30 to 60 minutes, depending on the restaurant’s level of busyness (higher on weekends) preparation time and location. He also handles orders for pick-up, which doesn’t carry a delivery charge.

Karspeck wants to expand his app and website to include listings that advertise local contractors and service providers and upcoming community events, something that Eventbrite, Berthoud Main Street and the Berthoud Area Chamber of Commerce already do. He plans to offer a directory and event page as an additional service for his users, he said.

“It’s a way to show what’s going on in the community,” Karspeck said.

As mayor, Karspeck has a connection to community events and happenings. He has to juggle both roles of mayor and business owner and his two passions. If he has a town meeting or event to attend, he has to find a driver or temporarily close his app—currently, he is working with a driver who works weekends.

“Being mayor takes precedence,” Karspeck said. “Ultimately I’m the mayor but I have a delivery service on the side. It’s really beneficial as a mayor, you’re representing businesses and you want them to do well.”

“It’s exciting and exhausting and all that on top of being mayor,” Karspeck said. “It’s really fulfilling to work with local businesses, knowing I can help them out.”

Karspeck, a Berthoud native, graduated from Berthoud High School in 2006 and Colorado State University in 2010 with a bachelor’s degree in communication studies. He served as a board trustee from 2016 to 2018 before becoming mayor.