A doll with a kind message

Berthoud resident Victoria Farmer was spending a quiet afternoon at home with her infant son and 2-year-old daughter last summer when something happened that would forever change the course of her life. 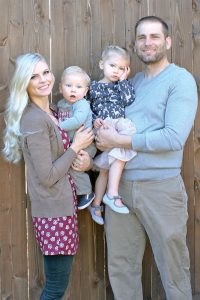 “I had left my daughter Anistyn in the other room while I nursed Madox, my son. She couldn’t have been alone for more than a few minutes before I came back out,” said Farmer.

It started out just like any other day, but the scene she returned to upon reentering her living room that July afternoon would soon go viral, making national, and then international news.

“There stood my 2-year-old, covered head to toe in white paint,” said Farmer. Not only did Anistyn look like she’d bathed in the bucket of paint Farmer had been using for a remodel project, she’d left little white footprints across the hardwood and smeared the stuff across the front of the fireplace.

“I was living in Aurora near my sister at the time, and I immediately called her to come help me clean Anistyn up, but before we did I had to snap a picture of the mess.” Farmer posted the photo on Facebook later that evening and was shocked to find it had gone viral in a matter of mere hours.

Before she knew it Farmer had become a celebrity, her story appearing on Fox News, Good Morning America, Inside Edition, and Ellen, as well as being a top hit across social media outlets worldwide.

The stay-at-home mom was soon able to look back and laugh at the mess her budding artist had made, and Anistyn continued to make her smile with her imaginative, if mischievous, antics.

Weeks later, after the commotion had died down, Farmer stumbled upon the image online and was dismayed by the comments it had generated since its first appearance.

“There were lots of great comments from people who said they could relate, but there were really negative comments too,” she said. “People were asking where the parents were and how they could have let this happen. There was so much judgement. It hit me then that this was the world my kids would grow up in.”

The birth of a business 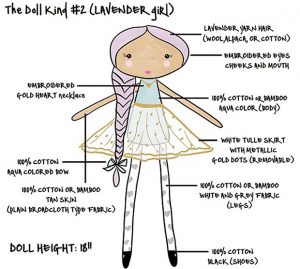 After reading the insulting comments posted under the viral photo, Farmer knew she had to act.

“I realized in that moment that people aren’t born mean, and that I had to find a way to help children keep their kindness into adulthood and spread it to others.”

Thus, The Doll Kind was born.

With a mission “to empower and inspire a generation of children to create a kinder world, one heart at a time,” Farmer’s start-up, The Doll Kind is just days away from opening for online business.

The website, www.thedollkind.com, will have three soft, huggable 18-inch dolls available for sale: one boy style and two girls. Each one will include a bag of heart tokens inscribed with inspirational messages.

“The tokens are meant to be given out by the children as acts of kindness, to encourage them to do more good and encourage others to do the same,” said Farmer.

Farmer’s taking the mission of kindness one step further – for each doll purchased, her business will donate a doll to a child in need.

“Right now that’s the biggest part of it for me, the charity side,” she said. The Doll Kind recently partnered with the Ronald McDonald House in Aurora, but hopes to expand their reach to children around the world.

“It would be so amazing to go to different places in the world and give out dolls to children who could use a companion,” said Farmer. “It’s all about the kids; creating a better world for them by spreading hope, and helping them create a better world in the process.”

Farmer, and her partner Jackie Konczol, a long-time friend who works with Farmer long-distance from Louisiana, are in the process of creating a campaign on Kickstarter, a popular online-funding platform for creative projects, to help get the ball rolling. The campaign launches March 31 and will run through April 30.

Anyone interested in becoming a backer for The Doll Kind will be able to make a donation at www.kickstarter.com to help with start-up costs. Backers pledging $49 or more will receive a doll as a gift, before they are available to the general public.

“The Kickstarter campaign is awesome because our Kickstarter backers get priority and get the first dolls available,” said Farmer. “It’s a way to build community around the project and make it come to life.”

While brainstorming her new business venture, Farmer came across a grant opportunity offered by global juvenile products manufacturer, The First Years. For the first time, the company had decided to offer grant money to start-ups across the nation, through a program called “The First Years Parentpreneur Grant.” Just days later a friend tagged Farmer in a Facebook post about the same grant.

“It was a crazy coincidence, so I talked to my partner and we decided to go for it,” she said. The two filled out a questionnaire about their business’ strengths, weaknesses and goals, submitted a business plan, and sent in pictures of their first doll prototype.

Over 100 businesses nationwide applied to receive a portion of the $50,000 offered. Ten made the cut, each in business less than five years, and each with at least one child under the age of five. Farmer, who applied for the grant in October, was selected this month to receive $6,000.

“Starting a business with two small children sometimes makes me feel like a crazy person,” said Farmer. “The validation of this grant, and knowing that a huge company wants to invest in us, keeps me going. Knowing I can inspire my kids keeps me going. I don’t think I could ever want to give up.”

Now, with a grant under her belt, and a Kickstarter campaign ready to launch, Farmer’s making big plans for the future. “I think the company’s going to do so much good and it’s going to be such a success,” she said. “We really just want to teach children that anyone can be kind no matter who they are or where they come from.”

As for little Anistyn, Farmer hopes her daughter will have the chance to look back on the incident that brought The Doll Kind to life with the same sense of humor so many have.

“It’s not about sheltering kids from the world, it’s about raising them with character and to overcome the obstacles that come their way.”