Not your usual laundromat

Mike Wood has lived in Northern Colorado for the past three decades. In that time, he has built a successful credit card services business — AdvantageCardServices.com — and created a life for himself in Berthoud. But changes brought on by the pandemic and an increase in remote work left Mike looking for a challenge. 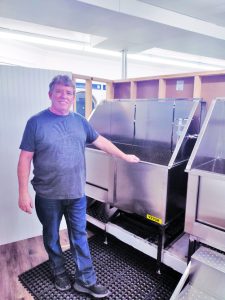 Photo by Will Cornelius – Mike Wood stands next to one of the three new dog washing stations at Loveland Shop N Wash at 540 N Jefferson Avenue in Loveland.

An opportunity came knocking when a friend contacted Mike about taking over the lease of a struggling laundromat in Loveland. “It was really just, sign here and it’s yours,” Mike explains. Describing the place Mike said it was, “Not really much of anything.” But where others saw undue risks, Mike saw unrealized potential. “Laundromats that are profitable are in demand,” he said. So, he signed on to the lease, and the Loveland Shop N Wash was born.

As Mike said his number one priority is “winning our customers back.” The laundromat had been a neighborhood staple over the decades. It was originally started in the 1960s before winding through a series of owners. The previous tenant had struggled to keep the laundromat open and operational during the covid pandemic. When Mike took it over half of the washers and dryers were not working and needed to be repaired.

Looking to increase income and expand the offerings of the laundromat Mike began exploring new revenue streams. “It’s an old building, but the bones are good,” said Mike. Laundromats need special commercial plumbing to handle dozens of washing machines using water at once. This led Mike to install three dog washing stations inside the laundromat. “We’re the only place around here with an ADA and kid-friendly dog washing station,” said Mike. Dog washes are $13 including shampoo and $10 for each additional dog, some of the lowest prices in town.

The Loveland Shop N Wash had a soft opening on Friday, April 8th. “It’s all just getting the word out at this point,” Mike said. After working out a few kinks and getting signage on the front of the building Mike held a hard opening on April 20th. To commemorate the occasion, and draw in customers, Mike offered free dog washing to customers. Commenting on business for the first week, Mike said “It’s been fine, we’ve had just a little of everything. All of our stuff is being bought, here and there.”

With an eye on the future, Mike is looking to add new services to the Loveland Shop N Wash, like a dog groomer or laundry folding service. His son has also become a part of the business as Mike looks to expand the business. With multiple services and the ability to pivot quickly, they are ready to keep what works and make changes when necessary. As Mike said it best “I’m a salesman.”