Growing up in Berthoud Exhibit to open 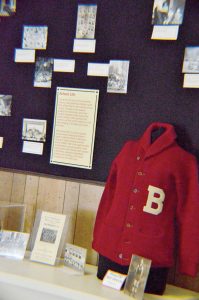 By May Soricelli
The Surveyor
The Berthoud Historical Society proudly presents its largest and most anticipated exhibit; “Growing Up in Berthoud: Coming of Age, 1900-1969.” The exhibit focuses on the fascinating youth of Berthoud and their stories which illustrate what life was like growing up in the small, rural, northern Colorado town.
“The concept of the exhibit was to get stories from past or present residents who recall what life was like for them,” said Karen Lloyd-D’Onofrio, Berthoud Pioneer Museum director.
One contribution came from 95-year-old Lucille Buehler who sent a letter of her vivid memories of growing up on a farm during the depression here in Berthoud.
“The Great Depression was not as arduous for rural residents as perhaps for others,” wrote Buehler. “We grew our own vegetables, raised the animals we later butchered, had plenty of milk from our cows, picked choke cherries for jelly by the Little Thompson, and canned fruit picked on the Johnson farm by the cemetery.”
The coming-of-age exhibit will be held at the Pioneer Museum and will display artifacts, letters and photographs. Along with the resident’s stories, the exhibit includes a timeline of historical events comparing Berthoud’s events with key moments in the general history of the time, like the Great Depression, from the firsthand perspective of Berthoud residents.
Stated on the Berthoud Historical Society’s website, the exhibit will take an in-depth look at the journey local children and youth made toward adulthood during seven decades that were indelibly influenced by the Great Depression, two World Wars and the birth of a modern nation in the 1950s and ‘60s. The exhibit will draw from the reservoir of local experience and then frame those stories within the broader context of national and world events.
There will be five major focal areas in the display. One area being “School Life” which includes the concept of compulsory education as it became an established part of the work day around 1917. Another focal point will be the “Leisure” of the time, highlighting many activities that happened after school whether it was fishing, biking, or going to the local soda fountain or malt shop. The third main aspect will be the “Work” that these generations experienced and how it evolved with the changing times. Work for these youth included rural farm life obligations in the early century. Throughout this time period Berthoud became commercialized and opened many shops and store fronts. In some cases young residents later on became integrated into work in local shops. The “Clubs” of the time are also a part of this exhibit, which explores the Boy Scouts program, pee-wee baseball, and local farmers groups. One aspect of this exhibit will be the scope of “Religion” in the town through the many churches that have served the community and brought varying cultural beliefs to Berthoud. At the beginning of the century German migrants came through on the railroad for work, some eventually staying, which brought their culture to the area, including an all-German-speaking church.
“Our hopes are that people will want to see the history and that they will be compelled to contribute their own stories.” said Lloyd-D’Onofrio.
The historical society encourages locals to share their memories and stories with the museum and donate or loan artifacts to be showcased.
“It’s really been well planned and carried out by Karen; there is a lot of buzz from the community; everyone is getting really excited; and she has made this even more amazing by designing it to be able to grow as stories come in,” said Mark French.
According to Lloyd-D’Onofrio there have already been 15 individuals who have sent in stories about their life growing up here.
Whether you are currently growing up in Berthoud, did grow up in Berthoud, or have children who are growing up in Berthoud, this exhibit will be a fascinating study of what it was like many years ago to “come of age” in our small town. The exhibit opened April 18 and runs through Nov. 2. Museum hours are Wednesday through Sunday 1-4 p.m.