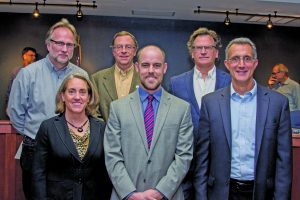 UPDATE: Six people have applied for the open trustee seat: Paul Alaback, Paul Frekey, Daniel Jones, Kevin Pischke, Heidi Short and Adam Stephen. The board will interview each of the applicants and make their appointment at a special meeting being held at Town Hall this Tuesday, May 1.

The town board seat left vacant by Trustee Will Karspeck’s transition to the position of mayor was left open by the Newly elected board Tuesday evening. The seat came open the moment Karspeck was sworn in as mayor. In addition to Karspeck, three new trustees were sworn in by Town Clerk Christian Samora. The new trustees, who will serve beside Karspeck on the board, are Pete Tomassi, Tim Hardy and Maureen Dower.

Applications for the open board seat will be available at Town Hall or on the town website. The deadline for filing applications will be 5 p.m. on Friday, April 27. There was controversy surrounding the method to be used to fill the seat which was left open when Karspeck moved up to mayor. Several Berthoud citizens voiced the opinion the vacancy be filled by Kevin Pishke, who was the next-highest receiver of votes during the April 3, 2018, election.

However, two previously-elected members of the board, Jeff Hindman and Brian Laak, did not see it that way and launched a behind-the-scenes campaign in a gambit to select Paul Alaback, a private citizen, to fill the vacancy. Alaback did not run in the April 3 election. The plan laid out by the two unraveled a bit as people in the community became aware of what was happening.

The result was a full board room with several in attendance prepared to voice their opinion regarding the process of selecting someone to fill the vacancy. At Tuesday evening’s meeting the trustees, including Hindman and Laak, thought better of appointing Alaback and, during discussion, decided the wiser choice was to take applications from anyone interested in applying for the vacancy and conducting interviews of the candidates who filed applications. The interviews would be conducted during a special meeting of the board on May 1, 2018.

At the meeting the trustees selected Hindman as Mayor Pro-Tempore.

In other action the trustees approved a resolution of substantial compliance for annexation of the Heron Lakes — Lake Club property. Public hearings regarding the annexation will be heard by the planning commission May 10, 2018, and by the town board May 22, 2018.

The evening’s proceedings were halted for approximately 15 minutes at midpoint of the session to allow those present to thank the outgoing mayor and trustees for their service on the board. Those leaving the board are Mayor Steve Mulvihill, Mayor Pro-Tem Chris Buckridge, and Trustees Jennifer Baker and Kelly Dunkelberger. Each of the outgoing trustees received a plaque in recognition of their service to the community on the board.