Republican Perry Buck, representative of Colorado State House District 49, which includes Berthoud, will be seeking her fourth and final term in office this November. Buck sat with the Surveyor last Thursday to discuss a wide array of issues facing the district and also mentioned that, if re-elected, her fourth term will be her final one. 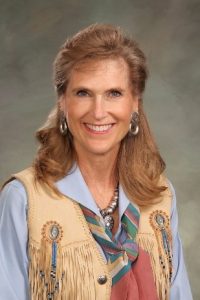 As a member of the minority party, Buck expressed a measure of frustration over the lack of movement on some key pieces of legislation, a primary one related to compensating property owners for mineral rights when a municipality enacts a fracking ban, but also stated she has been highly pleased to work across the aisle to find bipartisan solutions to problems facing the state and the district.

On the former, Buck sponsored legislation that requires government to compensate property owners when a fracking ban is introduced that prevents those individuals and families from reaping the financial benefits of the minerals underground. Buck said, “Whenever a municipality decides they will not allow fracking, and mineral rights are totally a property … if you don’t allow somebody to extract their property then they should compensate them for that.”

The legislation has been killed in committee by Democrats every year Buck has introduced it. Asked how to get such a bill enacted into law, Buck was blunt, saying, “Give me a majority and we will; we had every member on it from our side, but Democrats (blocked the legislation).”

Speaking on the larger subject of energy policy, Buck said she does not believe in subsidies for various forms of alternative energy, saying, “I’m the kind that supports all forms of energy and let the best one rise to the top. I’m not about government picking winners and losers, subsiding solar and wind, different forms of energy, I’d like to see a fair playing field with no subsidies.” She further expressed she believes Colorado has the most stringent regulations on oil and gas extraction, most notably hydraulic fracturing, or “fracking” and, as such, has complete confidence in the energy companies’ abilities to safely operate fracking and other oil and gas extraction operations.

While the lack of movement on some energy issues has been a frustrating part of serving in the state legislature, Buck said she was highly pleased with the bi-partisan tele-health legislation she carried. The measure, which allows patients to circumvent insurance companies by creating one-on-one contracts with their primary care provider, passed both chambers of the Colorado General Assembly unanimously.

Buck explained she had a potentially cancerous mole removed and the doctor who performed the procedure got her on board with the legislation. Buck said she was “very, very fortunate to carry” the legislation, which she called a “good, bi-partisan bill,” and, “I do feel I reach across the aisle.” Buck said healthcare issues are highly complex and that, “with healthcare we have to start thinking outside the box.” She explained preventative care is critically important and people need to continue to learn the benefits of healthy living, but there is a fine line of using the limited amount of tax revenue on it.

On education policy, Buck said the funding mechanisms in the Gallagher Amendment and Amendment 64, which legalized recreational marijuana, both need to be evaluated. With Amendment 64, the first $40 million in tax revenue is stipulated to go to education construction funding, but that amount is “just a drop in the bucket,” as large capital construction projects are very costly.

On Gallagher, Buck said it needs to be tweaked, as property tax revenue from commercial properties pay three times what residential pays. Buck cited Pitkin County as an example, saying that county, which includes the wealthy Aspen area, does not pay their fair share and get “backfilled” from the state government for education costs.

“The commercial side has to pay three times what the residential pays. There are so many roof tops that the amount of money needed for schools, for police and fire, for things like that – it’ll be a tough fight to ask people to pay more property taxes, but education is huge,” Buck said. “Education is big, but I think we do have to look at Gallagher. What sounded like a good idea at one point in time is not healthy for our schools,”

Buck says she would be honored to serve as the House minority whip, a leadership position in the lower chamber, again if she is re-elected to a fourth term in November, calling it “a great honor to be elected by your peers to serve in leadership.

Further information on Buck’s campaign can be found at www.perryforcolorado.com.