Participating in sports can be a major asset in the developmental process for young people. By playing sports, they learn to follow directions, cooperate with their teammates, understand their role on a team, get valuable exercise, and hopefully have some fun along the way. In specific sports, young people learn the rules of the game and develop their skills; be it shooting a basketball, hitting a baseball, or kicking a soccer ball, which, in some cases, can lead to lifelong passion for the game. 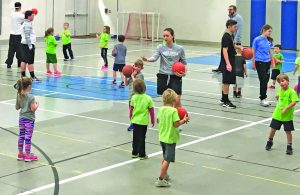 Currently, in the winter months, the primary sport offered by Berthoud Parks and Recreation is the basketball program. Children at age four can join the Little Dribblers basketball program, with the sign-up period lasting from Nov. 1 to 30 annually, with the season taking place in January and February. In the Little Dribblers instructional basketball program, youths will learn the fundamentals of basketball and develop motor skills such as running, jumping, sliding and shuffling. The programs are led by an adult instructor with the help of high school athletes. The program enjoys ample participation, with over 50 children participating over the two nights the program is offered, according to Berthoud Parks and Recreation.

For slightly older children, the town recently began offering a three-versus-three youth basketball league for first- and second-graders. In this program, participants are still taught the fundamentals of the game, such as passing and shooting, but do so in a league environment as part of a team. This provides an opportunity for them to learn sportsmanship and teamwork and compete against other kids their age. The three-vs-three setting, rather than five-vs-five, as is customary in basketball, allows all of the participants greater opportunities to handle the ball and guard players from the opposing team. The registration period is July 1 through July 30 ,with the season taking place from October to December. The 2017 season had over 60 participants.

The final step before students can begin competing in the junior high and, eventually, high school leagues, is the third- through sixth-grade divisions. The program is divided into four leagues: third- and fourth-grade boys, third- and fourth-grade girls, fifth- and sixth-grade boys and fifth- and sixth-grade girls. The league lasts eight weeks, the first two weeks dedicated entirely to practice, followed by six weeks of practices during the week and games on Saturdays. This age group features the more traditional five-versus-five game format, and Berthoud Parks and Recreation has teamed with Thompson River’s Parks and Recreation to allow the participants to compete against teams from communities outside of Berthoud. Registration for this level of the basketball program is during the month of November, with practices and games taking place in January and February.

Beginning this season, the third- through sixth-grade leagues added an end-of-the-season skills competition that is much like the NBA All-Star Skills Competition. The skills competition will include a shooting competition and an obstacle course, with each of the four divisions offering first-, second- and third-place prizes. The organizers wanted to do something fun and unique to conclude the season, and the inaugural Berthoud Parks and Recreation youth basketball skills competition will be held on March 3, 2018.

Further information on youth sports offered by Berthoud Parks and Recreation can be found on the town website at www.berthoud.org/parks-recreation/recreation/youth-recreation.