Memorial Day service in Berthoud to honor servicemen and women 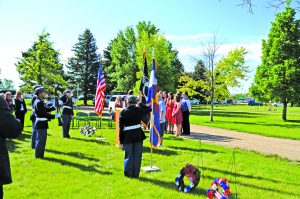 The post’s namesake, Army Staff Sgt. Justin Bauer, was a civilian firefighter and a military paratrooper who died in combat Jan. 10, 2009, in Iraq, and Spc. Gabriel Conde recently died, April 30, in a combat operation in eastern Afghanistan. Bauer graduated from BHS in 2002 and Conde in 2014.

“The war’s not over, and local boys are still dying,” said Berthoud resident Paul Talafuse, finance officer for American Legion Justin Bauer Memorial Post 67 in Berthoud. “If people can take an hour of their day to honor those who have given up their lives, it’s appreciated.”

The service will begin at 9 a.m. May 28 at Greenlawn Cemetery with traditional activities, speeches, and poetry readings bringing together veterans and residents as they remember those who have lost their lives in service to their country.

“It’s paying tribute to all of the people who have defended our country and lost their lives,” said William “Bill” Sterck of Berthoud, post adjutant for American Legion Post 67. “I like the fact people come out and remember there are people who are willing to give up and sacrifice so they can have a free life and the freedom America provides.”

The presentation of colors by the Loveland High School Indian Battalion Army Junior Reserve Officers’ Training Corps (JROTC) will begin the service, followed by a performance of the national anthem by the BHS Bridge Between Show Choir. The Pledge of Allegiance will be given and there will be an invocation and an introduction to Memorial Day and why and how it is celebrated, read by one of the American Legion officers.

Sterck explained how, at the time of World War I, the graves of servicemen and women were decorated, and Decoration Day was declared to honor the fallen. In 1971 the day became Memorial Day and a national holiday by an act of Congress.

The ceremony will continue with the reading of poetry, including “In Flanders Fields,” by the late Canadian physician Lt. Col. John McCrae, about the importance of the poppy flower to Memorial Day. Berthoud poet Virginia Huppe will read her poem, “I Never Heard a Man Complain.”

Next will be the placing of the wreaths for the American Legion, the auxiliary and other organizations, and the Bridge Between will sing “God Bless America.”

There also will be a guest speaker, Staff Sgt. Corinne Hogg, who served in the U.S. Marine Corps 1987-1997 during the Dessert Storm era.

“We haven’t had a female perspective before, what it was to be a female in the military and what it means to her to be a veteran on Memorial Day,” said Kraig Patriquin of Berthoud, commander of American Legion Post 67.

Trumpet player Scott Sessions will play “Taps,” Beth Sterck of the auxiliary will give the benediction, and the JROTC will retrieve the colors.

“It’s important to take time to remember the fallen,” Patriquin said. “It’s a day of reflection. … It is one of the most sacred traditions.”

That tradition returned to Berthoud in 2007 when American Legion Post 67 took over the Memorial Day ceremony, held off and on since the Legion’s founding in 1919.

“A lot of us had children serving in Iraq and everybody was going to Longmont and Loveland for Memorial Day,” Talafuse said, adding that when American Legion Post 67 learned about how many local servicemen and women lost their lives in service to their country they wanted to bring the ceremony home.

“We’re among the oldest posts in America,” Talafuse said.