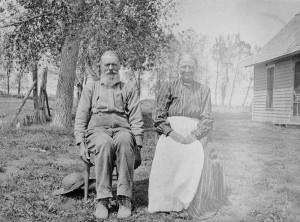 Charles and Harriet Keirnes came to the Little Thompson Valley and established a homestead near Twin Mounds in 1880. Upon their retirement from farming, they moved to a house at 549 Fifth St. in Berthoud.
Photo courtesy of the Ludlow Collection/Berthoud Historical Society

Charles Keirnes was one of Berthoud’s early homesteaders. Along with his wife Harriet, Keirnes came to the valley in 1880 when the original Berthoud settlement was situated on the Little Thompson river bottom. Like other early community founders; such as Lewis Cross, Peter Turner and Major John Kerr, Keirnes was a native Virginian who bounced around the Midwest before finding a permanent home in Northern Colorado.

Keirnes was born in Fauquier County, Va., in 1841. At the age of 20, he joined the Confederate Army and served for the balance of the Civil War. In 1866, Keirnes married fellow Virginian Harriet Templeman. Two of Harriet’s sisters were married to Keirnes’ older brothers.

In the late 1870s, Charles and Harriet Keirnes and Richard and Octavia Keirnes (Charles’ older brother and his wife), sold their homes in Missouri and joined a wagon train bound to Colorado. The couples explored possibilities in the Longmont area before learning of land near Berthoud that was available for homesteading. In 1880, both Charles and his older brother, Richard, staked homestead claims in the Twin Mounds district northeast of Berthoud. William Keirnes, a third brother who came to Colorado earlier, worked as a miner.

With them, the Keirnes men brought their wives’ parents, William and Frances Templeman, as well as niece Cynthia Keirnes. Another Keirnes brother, James, joined them in the late 1880s and worked as a plasterer and painter in Longmont.

In 1880, when the Keirnes arrived in Northern Colorado, the Little Thompson Valley was arid grassland that was the domain of snakes, prairie dogs and antelope. Many years later the Keirnes’ descendants recalled, “Rattlesnakes were prevalent on this prairie land. Walking plows, drawn by horses or mules, were the only means of preparing the land to grow crops. Charles fashioned leather leggings to protect his team from snake bites. For his own well-being, he wore his old Civil War cavalry boots.”

Since the Keirnes homesteads lacked a ready supply of water, they hauled water in barrels from the Big Thompson River to supply their domestic needs. Charles, in particular, devoted much of his time to enlarging and improving the Home Supply irrigation system that provided irrigation water to his farm. The Home Supply canal, 25 miles in length, originated at the mouth of the Big Thompson Canyon west of Loveland and carried water to farms in the vicinity of present-day Johnstown.

Like many early settlers, Charles and Harriet Keirnes were active members of the United Brethren church that had established its presence in Northern Colorado in the 1870s. The Keirnes were parents to six children that included Octavia, John, Annie, Lee, Walter and Albert. Upon retirement from their farm northeast of Berthoud, Charles and Harriet moved to a home at 549 Fifth St. in Berthoud. Charles died in 1920, and his wife Harriet passed in 1933.