Courtesy photo – Chris and Brenda Burke attract the crowds when they bring their food truck to breweries, parties and events in Berthoud and Northern Colorado. Here, they parked the truck for an office party.

Every Sunday, the Taco Man parks his food truck outside City Star Brewing, but that’s not the only place he travels to serve authentic Mexican food.

Chris Burke and his wife, Brenda, co-owners of the Taco Man, bring their food truck to breweries and events throughout Northern Colorado. They officially opened their food truck in April 2020. 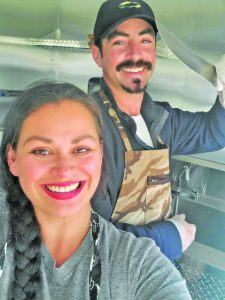 “We wanted to offer food that we love,” Chris said.

The Burkes picked a name that’s easy to remember, while also being unique, Chris said.

“I assume whether you speak English or Spanish, you can pronounce Taco Man,” Chris said. “Go to the Taco Man where it feels more personal.”

The menu at Taco Man is pretty simple, but the options are many. Customers can select from tacos, quesadillas and tostadas, then pick the protein, such as steak, chicken, pork, shrimp, vegetarian or vegan. The menu also includes bean and cheese burritos, but those run out quickly.

“We try to accommodate and reach out to every customer,” Chris said. “We don’t cut corners. Every order is made fresh.”

Once an order is placed, the Burkes make the food on site, instead of prepping it ahead of time or having the menu items premade. The Burkes created their recipes with their tagline in mind, “We serve real food with real taste.”

“(Brenda’s) the mastermind behind it,” Chris said. “We obviously are a team. We discuss this or add that. We try to keep it as natural as possible.”

The Burkes bring their food truck to breweries, parties, weddings and events in Berthoud, Loveland, Fort Collins, Windsor, Greeley and Timnath. They operate it 1-8 p.m. Sundays at City Star Brewing and visit an apartment complex in Greeley twice a month.

“That’s a good spot. We get regular customers,” Chris said about the Greeley site.

As far as parking at breweries, the Taco Man offers customers something to eat alongside their beer. Often, those businesses don’t have the space to build a kitchen or have a kitchen that’s fully operational.

“It’s cheaper for the brewery to do. It’s convenient for the people drinking at the brewery,” Chris said. “Beer obviously goes well with food.”

The Burkes have two food trucks, but are operating one without the help of staff. They could hire as many as eight to accommodate the demand and to fully staff both trucks, Burke said.

“That’s our goal is to grow,” Chris said. “I have ideas, but the hardest thing is finding help. … I can’t expand unless I find help.”

“I just love every ounce of energy that goes into our business,” Chris said. “I met so many people around the community. We met them through the food we provide.”

The Burkes work hard at what they do, Brenda said.

“It’s the love we put into it and the work,” Brenda said. “When somebody says, ‘It’s the best tacos I’ve ever had,’ it’s exciting for someone to say that and really motivates us.”