Berthoud’s own Bee Squared Apiaries has the tagline “Bee exponentially better” and according to the Good Food Foundation, the honey they produce is certainly that. The business received its third award from the foundation last month for its exceptional fennel pollen honey. 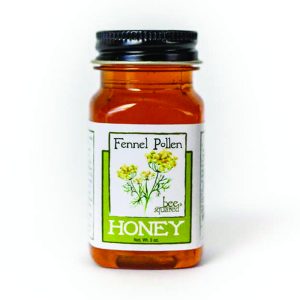 The twelfth annual awards are a prestigious competition that recognizes excellence in American-made foods and beverages on not only their flavor but also on the craftsmanship involved with how these products are created and how responsible they are socially and environmentally.

For those in the food industry, it’s a major honor that owners can proudly show they have achieved by displaying a blue Good Food seal on their products. This year over 2000 entries from all 50 states across 17 categories made their way across the judging panels tables. And, the judges themselves represent industry leaders, technical experts, grocers, chefs, food writers and general “food movement leaders” that score each of the entries winnowing the selections down to just 200 winners. The exceptional food crafters who make it through the blind tasting and meet the environmental and social responsibility standard of the foundation come out on top.

Bee Squared owner Beth Conrey said she was ecstatic when she heard they had won. “We only enter when we think we have something capable of winning…I knew as soon as I tasted it we had a winner.”

Prior to the latest win, the other award-winning flavors produced by the business were rose honey and whiskey barrel aged honey.

The fennel pollen honey that took the honors this year combined the local alfalfa, wildflower honey base and infused it with the pollen from Italian fennel a flowering plant species with yellow flowers in the carrot family. Fennel has a natural slight sweetness with a mild licorice flavor but for those turned off by the thought of that particular flavor combination Conrey explained, “It’s a subtle flavor, it’s alchemy, it transforms both flavors into something more.”

What started as two hives a little over 20 years ago has grown into a thriving business and around 120 bee colonies around northern Colorado including what they call their “celebri-bees” located at higher-profile locations like the Denver Botanic Gardens, hotels and the Denver Convention Center.

Conrey has used her success in business to help support causes that are close to her heart, another aspect that was taken into consideration for the award. The business gives back to organizations like People & Pollinators Action Network, the Pollinator Stewardship Council and is a member of the 1% For the Planet initiative a global network of businesses that work to tackle our planet’s most pressing environmental issues. “It’s important for people to know that we “bee” exponentially better in everything we do, that’s how we go about it,” Conrey said of Bee Squared’s efforts to steward their bees and the planet well.

The company offers a variety of products including raw honeycomb, beeswax candles, soaps, bee pollen, varietal honey like clover and orange blossom as well as flavors like vanilla saffron, espresso and a flavor called “Risque’ Whiskey” a combination of the award-winning whiskey barrel aged honey infused with a secret chili pepper medley.