If the shoe fits, take it to Pierre’s Shoe Repair

It’s part technical skill, part art form and those who do it have become few and far between. Luckily Berthoud has Pierre Tronik a fourth-generation master cobbler ready to take on the shoe repair needs of the community and a lot more. 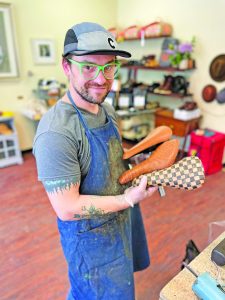 Pierre’s Shoe Repair opened in April this year in the Berthoud Village Shopping Center, 907 Mountain Ave., in the unit that formerly housed Berthoud Candy Company. Since then, Tronik and his wife Emily have been busy establishing their new business that also includes some retail that the duo hopes to continue to expand.

Pierre who grew up in Portland, Oregon has been working on shoes since he was 11 years old. His dad, also a cobbler, would reward good grades with allowance and as he put it, “I didn’t get them so I started fixing shoes pretty early so I could get money…and that’s all she wrote.” He started out doing minor sewing jobs, shining, and conditioning shoes, and doing more tedious work like pulling out zippers that his dad didn’t like doing. Although not a formal education in the trade, he learned through a more traditional route in a sort of apprenticeship watching and learning from his dad. After years of the more mundane tasks, he said he finally got to learn the “fun” jobs like resoling cowboy boots.

The couple relocated to Berthoud, Emily’s hometown, five years ago after closing their shoe repair business in Portland where the two met. Pierre continued working in shoe repair and spent several years with a company in Denver making specialized orthotics. With all of that experience under his belt, they embarked on their new business in Berthoud.

Emily has been a chef since 2003 but says at this point, she is “semi-retired” while she runs the front of the house and has also taken up smaller shoe repair jobs learning from Pierre as he did from his dad decades ago. She has also brought in products from small businesses around the world as well as here in Colorado to the store including expected items like handmade socks and shoes to bath and body products, and chocolates, a little nod to the store’s previous tenants.

The shop has several machines to perform functions like resoling, patching, stretching and fitting. Many of which came from other family-owned shoe repair shops that have closed. “Every piece of equipment I have has a story,” said Tronik, including one piece that required him to load the large machine by himself on Santa Monica Blvd. near Beverly Hills. Unfortunately, there are a lot of shops that go out of business each year as older owners have reached their retirement years without a successor. According to an industry report, there are only 3,678 shoe repair shops left in the U.S. “We’re a dying breed for sure,” Pierre commented. This has fueled another dream for the future that the Troniks have to open a school to train a new generation of cobblers, something that currently is expensive and only exists outside the U.S. in places like Italy.

Tronik has seen it all and made the repairs from Ariat roper boots chewed up by a puppy to Christian Louboutin heels that needed their iconic red soles replaced. “Don’t think something is too far gone, don’t be afraid to bring it in, don’t look at your shoe and think there is no way he can do this, I’ve looked at way worse, I guarantee I can still fix them,” Tronik said. Even in an era when the environment and sustainability are more important than ever many people are apt to only get expensive shoes repaired with the idea less costly shoes are “throw-away.” Tronik was quick to add that if you love a pair of shoes, they fit you well and are comfortable it doesn’t matter how much they cost having them repaired might be worth it saying, “Payless or Neiman Marcus it doesn’t matter I can get it done.”

When asked what his favorite thing about being a cobbler was Tronik said, “Seeing the people’s reactions when they bring in a pair of their favorite shoes and they are completely destroyed…and a week later they come back and see them and don’t recognize them because they’re like brand new that’s the best part.”