Spartans fight to finish second at first ever home tournament 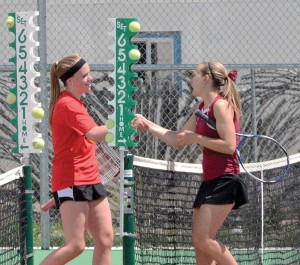 Berthoud’s Hannah Nash shakes hands with Skyline’s Eryn Coyle after defeating her, 6-2, 6-0, in the first-round consolation match at the Berthoud League Tournament on Friday, April 25. Nash finished the day in second place in no. 2 singles. Surveyor/ John Gardner

For the first time, the Berthoud Spartans girls tennis team hosted a tournament at their home courts on Friday, April 25. They also fought hard and walked away with a second-place finish against visiting Erie Sterling and Skyline.

“We’re just really happy with the turnout,” said head tennis coach, Leigh Vitasek. “We had a great time and it was a positive experience for all of us.”

The highlights of the day came in the three Berthoud singles, two of whom, Senior Emmie Wellems and sophomore Emily Marty, took first place after winning the first two matches of the day. Hannah Nash also finished the day with a second-place victory.

Wellems, 5-4 on the season, played her first match aggressively against Sterling’s Anna Kenney, winning 6-4, 6-1 in straight sets. It was the second meeting in just four days between Wellems and Kenney, however, in that first meeting, Wellems won the first set, 6-1, but fell to Kenney in the next two, 3-6, 4-6.

It was a rematch Wellems looked forward to.

“It felt really good to come out in two sets and win it and be done with it,” Wellems said. “No matter where I played her, I knew I would play her at some time today, my goal was to win because I felt that I could win the first time we played.”
After Wellems had warmed up, she dominated Erie’s Brittany Hobbs in straight sets, 6-0, 6-0 to secure first place.

It was a performance that Vitasek was not surprised with.

“When [Wellems] is focused she can beat anyone she plays,” Vitasek said. “She has the ability and is one of the best players out there. She was focused and on that day she showed it.”

Berthoud’s Marty, 7-2 on the season, played the longest match of the day against Sterling’s Jenna Maxwell ultimately coming out on top with a score of 7-5 (7-5), 6-3. These two also met just four days earlier, as well, with Marty again on the winning end. But that didn’t allow Marty to relax.

“I knew it was going to be tough but I was able to pull it through,” Marty said.

“I was exhausted, but I was just thinking that I had to get back on top,” Marty said of playing the tiebreaker set. “It was difficult but it was good.”

“She’s just played well all year,” Vitasek said adding that the sophomore improves with each match she plays.

Berthoud’s Nash, 7-4 on the season, lost her first-round match 1-6, 4-6, to a determined Lexi Thomson of Erie. However, Nash collected herself and returned to the court and won her consolation round match decisively against Skyline’s Eryn Coyle, 6-2, 6-0. Nash then defeated Sterling’s Kayla Smock, for the second time in four days, in another long match with two tie sets, 7-6 (7-1) and 7-6 (7-5).

“Hannah is just a solid player,” Vitasek said. “She is just straight and calm as you can go on the court.”

At the end of the day, that is all the coach hopes for.

“That’s how, as a coach, you want your players to end up; better at the end of the year,” Vitasek said.

Each of the doubles teams lost their first round matches, however, the no. 2 doubles team of Ashley Lozinski and Jesse Sykes, who lost the first-round match to Erie 4-6, 4-6, came back and won the next two games to take second place on the day. First they defeated Skyline in straight sets, 6-0, 6-1, and then they defeated Sterling, 6-0, 6-3. Lozinski and Sykes lost to Sterling earlier in the week, too, but were able to get some redemption at home, Friday.

Berthoud’s Karly Hardy and Zoey Pettit lost to Erie 2-6, 2-6 in their opening match but won their consolation match against Skyline 6-1, 6-1. However, they lost to Sterling in the next round to finish the day in third place.

As well, Berthoud’s Joanna Pyles and Teagan Ives lost vs. Sterling 1-6, 4-6, won their consolation round vs. Skyline, 6-0, 6-3, and ended the day in third place. Sterling lost in the first-place match vs. Erie, so since Berthoud had already lost to Sterling, they didn’t have to play Sterling again.

The girls are playing in the 4A Region 4 tournament in Greeley. The tournament started Wednesday and will concluded Thursday. Results will be posted on Berthoudsurveyor.com as soon as received.