Berthoud softball aims for the fence 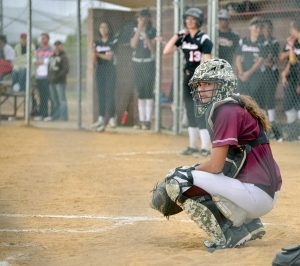 Roster turnover is an inherent part of high school sports. Each year a team’s seniors graduate and take the next step in their lives and the onus falls on the remaining underclassmen to replace their production the next season. Sometimes there are many big shoes to fill and other times not. As they prepare to begin the 2016 season, the Berthoud High School (BHS) softball team finds itself in the former category.

One of class 4A’s long-dominant powers and nearly-perennial participant in the state tournament, the 2016 Lady Spartans will be tasked with replacing five players – two starting pitchers, both corner infielders and their centerfielder – who comprised the core of the 2015 state-qualifying squad.

It is a challenge that Spartans head coach Buddy Kouns is both keenly aware and not overly concerned.

“It’s something I talked to the girls about when we first started, because they know what we lost, but I told them that I want us to reload rather than rebuild,” Kouns explained. “Yeah we play in a tough league, but we’re historically one of the top teams, and I don’t expect that to change this year.”

While Kouns admits the team will not have the experience and power in the heart of the order that last year’s regional championship squad possessed, he believes the team will be very well-balanced throughout the batting order.

“I think we’re not going to be as talented in a couple of spots, but I think our order is going to be more balanced this year,” Kouns said. “I think we’re going to have a threat each inning, even if we don’t have as much of a deep ball threat. I do believe we are going to be stronger one-through-nine than we were last year.”

One key player who is returning from last season is senior catcher Hannah Langer, whom Kouns said was “unquestionably” the leader of the team. Langer has been the Lady Spartans every-day catcher since her freshman year, and Kouns raved about her ability to work with the team’s new triad of pitchers.

“Hannah handles pitchers really, really well, she’s so positive; she’s a great one to have. She gathers those younger kids together and really leads by example. Granted, we’re not going to be as seasoned in the circle as we were last year … but we’ve got three really promising sophomores.”

Sarah Jorissen demonstrated poise beyond her years last season as the team’s lone freshman starter, playing in all 22 games and finishing the season with a .300 batting average that ranked fifth on the team. The sophomore will be the team’s number-one pitcher and Kouns explained Jorissen and Langer already have developed a great relationship.

Also returning from last season is senior Morgan Schachterle, who Kouns said will get the first chance to win the starting first-base position, as well as outfielders Tristen Pope and Sotera Dageenakis, and junior Delaney Fouts who played all 22 games at second base last season.

The BHS softball program has always benefited from a pipeline of talent that keeps the team in contention seemingly every season, and Kouns believes his fundamentals-centric approach will keep the trend continuing in 2016.

“We want to be as strong defensively as we can, we want to throw strikes, we want to make the routine play in the field, and we want to force the other team to make difficult plays, so we want to hit the ball hard,” Kouns explained. The hurdle the team will need to overcome, Kouns added, will be a mental one with a lot of players getting their first taste of varsity competition. The proverbial lights will be bright as the Lady Spartans begin the 2016 season as the No. 7-ranked team in Class 4A.

Berthoud opens the 2016 season on the road against Tri-Valley Conference rival, Mead on Aug. 23. The Lady Spartans returns home for back-to-back games against Roosevelt Aug. 25 and their annual under-the-lights contest with Thompson Valley on Friday night Aug. 26.