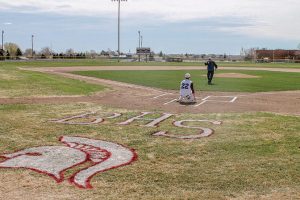 Jack Sommers tosses out the first pitch to Ridge Overholt at Jack Sommers Field at Berthoud High School earlier this week to celebrate the new infield that was recently installed to improve the field.
Courtesy photo

By Nick Yuska
Special to the Surveyor

After countless misplayed balls and bad hops, known as “Berthoud hops,” that resulted in errors and even a couple of injured faces, the Berthoud Baseball Club (BBC) has had enough, resulting in a drive to raise funds for a new infield.

This new natural turf has no dead spots and has an edge that smoothly transitions to the dirt on the infield, unlike the previous grass that looked like it was straight out of the famous film, “The Sandlot.”

“After taking one to the face, it’s nice to know that won’t happen again,” junior pitcher/infielder Chris DeSousa exclaimed with a smirk on his face.

After a winning season last year, the first since 1999, Berthoud has gained momentum this season and is looking to make the playoffs for the first time in over 20 years. But they need the community help to fund our new, state-of-the-art facility.

Big Foot Turf Farm, who has done infields with their state-of-the-art technology for teams in the minor leagues and even the infield at Coors Field, home of the Colorado Rockies, has completely changed the infield at Jack Sommers Field. Using a dual-plane laser, they are able to completely level out an infield that once had an obvious incline.

As a senior who has played countless innings, and even taken a couple of groundballs to the chin, this new infield will help elevate Berthoud baseball to the next level according to senior infielder, Brogan Sontag.

“We really are happy to have a field that’s going to help improve our play,” Sontag said.

The BBC has been selling $20 raffle tickets to help cover the costs of the infield upgrades. The fourth- and fifth-place-winners in the drawing receives $250 and $100 cash prizes. The second- and third-place-winners each receive a quarter of beef; 200 pounds of meat valued at over $1,000. The grand prize is a side of beef; 400 pounds valued at over $2,000.