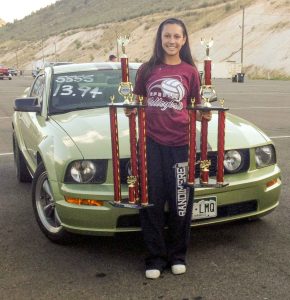 Berthoud’s Rheanna Goscha holds a pair of trophies she received at the Labor
Day School Days event at Bandimere Speedway in Morrison in 2014.
Courtesy photo / The Surveyor

Shirley Muldowney, who was known as the First Lady of Drag Racing, was a pioneer in auto racing and she paved a road for Berthoud High School junior Rheanna Goscha. Muldowney was the first woman to receive a license from the National Hot Rod Association (NHRA) to race Top Fuel dragsters and won the NHRA Top Fuel championship in 1977, 1980 and 1982.

Goscha, like Muldowney, has claimed her fair share of racing awards in capturing her own three drag-racing championships and earning 90 trophies in her nine years of racing. As a female racer, Goscha remains in the minority of a sport that can test one’s will and nerves. She is a member of a select Bandimere Speedway team comprised of 40 racers, in which only five are females.

“It’s exciting to race,” she said. “And you don’t have much time to think because of the speed. It’s become more an instinct now after all the years that I’ve been racing.”

Goscha races in various classifications, including the junior dragster class. This class runs a one-eighth mile and, due to her age, the dragsters are restricted to run no faster than 7.9 seconds or 85 mph.

She also is in the high school class and finished second out of 23 registered racers. She drove a supercharged 2004 Mustang that goes 0-60 in 4.2 seconds, reaching 105 mph.

A highlight this past season was the Labor Day School Days event where she finished first in the open class and second in the points class, with a total of 11 round wins on that day.

Goscha additionally drives in the junior drag comp classification where they go 0-60 in 2.2 seconds reaching 124 mph.

All these speeds and times are very impressive considering the average person gets their driver’s license when they turn 16 years of age.

Last week Goscha was recognized as the Berthoud Weekly Surveyor Athlete of the Week and shared that many people in town don’t even know she races.

If she continues her winning ways, Goscha could be following the path Muldowney blazed many years ago − a path that is travelled by few. But she could be racing her way to a finish as one of the best racers of any gender from Colorado.