Steve O’Hare of Berthoud wants to keep old and new tractors operating, so he started High Point Equipment Service nearly four years ago in his hometown.

“It’s something we need to preserve. We need to keep all the old stuff around,” said O’Hare, owner and lead mechanic for High Point Equipment Service LLC, 3573 E. Highway 56. “A lot of farm ground is disappearing, so a lot of tractors are disappearing.”

O’Hare offers a long list of services for tractors, construction and other heavy equipment, and works with a part-time staff of two mechanics and his youngest of three sons, Lucas. Focusing mainly on tractors; he provides overhauls, restorations, hydraulics, routine maintenance, tire replacements, exterior painting, and other repair services. 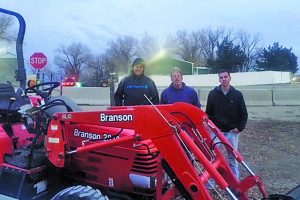 Courtesy photo – Steve O’Hare, owner and lead mechanic for High Point Equipment Service LLC in Berthoud, middle, poses Dec. 12 by a tractor he and his staff recently repaired. With him is his son Lucas, right, and Cody James.

O’Hare primarily works on diesel and gasoline-powered tractors ranging from five to 75 horsepower. The tractors are from the 1930s to modern day, but he keeps more of a focus on the older equipment. He also carries new and used parts for most tractors, and if he doesn’t have the parts can order them.

“Some of the older construction equipment is what we have a niche for,” O’Hare said, explaining he focuses on mechanical repairs and does not have the computer and diagnostic tools for newer construction equipment. “Bigger farm tractors use computers for everything. You don’t need diagnostics for tractors five horsepower to 75 horsepower. All of those are pretty self-explanatory. They are not as tough to diagnose as the bigger ones.”

O’Hare, who has 35 years of experience repairing tractors, heavy equipment and airplanes, initially worked out of his garage and offered mobile repairs. He did that for nearly two years before officially opening his shop in January 2015.
He operated it four miles east of Berthoud and, in June, moved it to a 3,400-square-foot leased building near Interstate 25. There he has room for eight repair stalls, a parts room, a wash bay, and a paint booth.

“It’s because of the hard work it takes to redo these tractors. They’re heavy. They’re really hard to work at times, because it’s a weight issue,” O’Hare said.

O’Hare chose the name High Point for his business to reflect the high point of performance he provides for his customers. It also reflects the mountains of Colorado, particularly Pikes Peak, which is the state’s highest point.

“I really fell in love with doing tractors. It wasn’t so complicated like the aircraft,” O’Hare said.

O’Hare bought his first tractor repair shop in Hygiene in 1995, but after 9-11 saw his business decline. He closed the business in 2004 and went back to work as an aircraft mechanic and also worked as a ground-support equipment mechanic at the Northern Colorado Regional Airport in Loveland. He spent a total of 14 years as an aircraft mechanic after graduating in 1981 from Colorado Aero Tech in Broomfield, plus another 15 years working on heavy equipment. He has 24 years’ experience working on tractors, because of the availability of a shop at the airport, giving him the opportunity to work on tractors for more than nine years.

“When I got done with the Fort Collins-Loveland airport I decided I was done working for someone and wanted to get back to what I do best, working on tractors and equipment,” O’Hare said. “It’s not as complicated and hard work as the aircraft.”