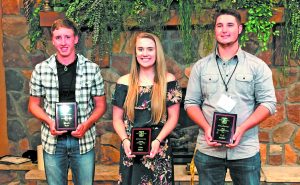 The 2017-18 school year was a historic one for Berthoud High School (BHS) sports. Over the course of the school year, the Spartans brought home a pair of state championships and broke seven school records. Four teams made the state playoffs, as did a pair of golfers, seven wrestlers, two swimmers and a multitude of track athletes. Six BHS athletes (by the conclusion of winter sports) had earned All-State honors and 14 signed National Letters of Intent to continue their athletic careers in college.

Long one of the school’s most successful programs, the BHS wrestling team took to the mat this winter under the leadership of new Head Coach, Will Carron, and did not miss a beat. Berthoud sent seven wrestlers, half the team’s varsity squad, to the state tournament. Junior Austyn Binkly and freshman Kolten Strait entered state as regional champions and both shined at the Pepsi Center. Binkly joined an elite group of Berthoud athletes as a state champion, taking home the gold medal with an 8-4 decision over Ariel Rodriguez of Eaton High.

The junior, who had medaled at state as both a freshman and sophomore, brought a business-like approach – complete with a three-piece suit and briefcase – to title night seeking the title had eluded him the two prior years. As Binkly explained after winning the championship bout, “What I’ve always trained for is one more match, I’ve always been one match away from my goal … all those extra workouts, all that extra time, it’s something that paid off.”

Berthoud was not done bringing home state championships after the winter sports season concluded. The 4x100m boys track and field team – Trinity Buckley, Ryan Schmad, Connor Siruta and Jake Rafferty – who had been running together since junior high, won first place at the state meet by a comfortable half-second margin. In the preliminaries, the team had broken the BHS school record with a time of 43.04. Three of the 4x100m team members – Buckley, Schmad and Rafferty – were joined by Brock Voth on the 4x200m team that also broke the standing BHS record in the event earlier in the season as did Schmad in the 400m race. Schmad also took home All-State honors for football, where led the Spartans and the Tri-Valley Conference (TVC) with 14 touchdown receptions.

Voth, in addition to breaking Berthoud’s standing single-season passing yardage and passing touchdowns record in fall as the Spartan football team’s quarterback, also broke his own record in the triple jump at the state meet. By breaking four school records in a single year, Voth was an easy selection as one of the Berthoud Weekly Surveyor’s Co-Male Athletes of the Year.

Joining Voth as the Surveyor’s Co-Male Athlete of the Year was three-sport athlete C.J. Balliet. Balliet was an All-Conference member of the defensive line on the Berthoud football team that began the season unranked and finished in the state playoffs for the first time since 2014 and also was a state-qualifier in the heavyweight class in wrestling. Balliet saved his best for last, however, leading the Berthoud baseball squad back to the postseason for the first time since 1999.

Balliet led Berthoud in a host of offensive categories including batting average (.493) on-base percentage (.592), slugging (.683 SLG), OPS (1.275), hits (33), RBI (27) doubles (eight), several of those marks also paced the TVC. Balliet did not do it all himself, however, as the Spartans got contributions from up and down their senior-heavy lineup that featured four players – Chris DeSousa, Colin DeVore, Brent Fowler and Hunter Pearce – who will be playing collegiately. DeSousa paced Berthoud with 82 strikeouts and broke a school record by striking out a whopping 15 batters in Berthoud’s opening-round playoff game against Thomas Jefferson.

In the fall, the Berthoud cross country teams, both the boys team and the girls team, joined the football team as a state-qualifier. It was the first time since 1984 that the Spartans sent both teams to state, a remarkable achievement that garnered cross country Head Coach Kristi Leonard Coach of the Year honors at the Berthoud Sports Hall of Fame.

While both the Berthoud softball and volleyball teams came up just a hair short of joining the football and cross country squads as state-qualifiers, both turned in strong seasons. Berthoud’s softball squad finished the regular season hot as winners of six of their final seven games. Sophomore Ashlynn Balliet was named as an All-State Honorable Mention and Tristan Pope, who signed to continue her softball career at Northeastern Junior College, hit a pair of homeruns in the regional playoffs.

The volleyball squad was led in 2017 by Mil Santos, who served as the team’s head coach for their 2001 state championship season and spent the last several years as the varsity assistant. Santos’ Lady Spartans finished the season 15-10 overall with their season ending in the regional tournament at the hands of perennial powerhouse and eventual state champion Lewis-Palmer. Berthoud saw the fourth and final season of standout outside hitter Julie Ward. Ward, who will continue her volleyball career at King College, broke the long-standing BHS record for career kills. The senior finished her career with a whopping 1,235 kills and this season also hit the volleyball trifecta, leading the Lady Spartans in kills, aces and digs. With such a dominant all-around season that included a spot on both the TVC All-Conference and All-State teams, Ward was an easy choice as the Berthoud Weekly Surveyor’s female Athlete of the Year.

Like the volleyball team, the BHS girls basketball team played this season under Alan Gibson, who had previously coached the team and returned this season to replace Randy Earl, who retired following the 2016-17 season. Gibson inherited a strong roster with state-championship aspirations and delivered a stellar season. Berthoud, with All-State honorees Emily Cavey and Sydney Meis leading the way the court, finished the year 18-7 and entered the state playoffs as the No. 17 seed and easily dispatched Pueblo Central in the opening round. While their season ended at the hands of Greeley Central in the next round, the season cannot be qualified as anything other than a success, even by the program’s high standards, and the future is extraordinarily bright.

When all was said and done, a record 48 BHS athletes were named as Surveyor Athletes of the Week for the 2017-18 school year.