Turnovers are among the most telling stats in the game of football; win the turnovers battle and you will almost always in the game. Playing against Fort Lupton in their season-opener last Friday night at Max Marr Field, the Berthoud High football team won the turnover battle 4-0 and the game by a 36-6 final score. 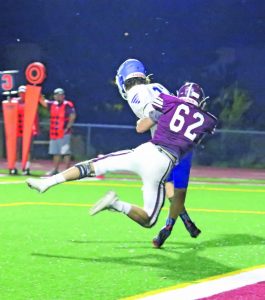 Photo by Angie Purdy Berthoud defensive end Matt Pelphrey tackles Fort Lupton quarterback William Alvarado in the endzone for a safety in Friday night’s season-opener. Berthoud dominated in all facets of the game, winning by a 36-6 final.

“We saw a few things we could that we could expose a little bit with our personnel against them, we came up with a couple tells about what their offense was going to run and we used that when we did our scout teamwork this week but it really takes the kids responding to that, identifying it and then executing it and I’m so proud of these boys tonight,” a clearly pleased Berthoud Head Coach Cory Ticnor said following the game. “We’ve been building since our scrimmage; this was another step forward and we’ve been talking about how we’re building this thing week by week.

The Spartans got after Fort Lupton almost immediately. Three plays into the game, senior defensive back Wyatt Spears recovered a Blue Devil fumble, setting Berthoud up at near midfield. In five plays Berthoud advanced to the Fort Lupton 27 where the Blue Devil defense stiffened. On fourth and nine, senior Tanner Coble made good on the 37-yard field goal to put the Spartans ahead 3-0.

Berthoud’s swarming defense kept at it, a gang tackle on fourth and one forced a turnover on downs – not counted as an official turnover on the stat sheet but critical nonetheless – two plays later sophomore quarterback Darin Davidson found standout receiver Jayden Hedelius for a touchdown; Coble’s extra point split the uprights and Berthoud led 10-0, all the points they would need.

Berthoud senior Garrett Glasser recovered another fumble on the next Fort Lupton possession. The Spartans immediately took advantage as junior Ben Hughes broke through the line of scrimmage and galloped 56-yards to the endzone and, after Coble’s kick, the rout was on with Berthoud ahead 17-0 with 3:33 still remaining in the opening quarter.

“I’m extremely pleased, Coach (Tyson) Painter, our defensive coordinator, really talks about nine guys to the ball on every play and that’s been our calling card since training camp and when you get the amount of turnovers we had tonight it’s really a testament to how hard our kids played on the defensive side of the ball and you can’t ask for much more than what they did tonight,” Ticnor said.

Even with a large lead, the Spartans did not let up. Davidson again found Hedelius, this time for a 41-yard score. Hedelius, after an All-Conference season last year, looks even more dangerous on the outside this year. The senior hauled in seven passes for 114 yards and two scores on the night.

For his part, Davidson played with the poise of a seasoned veteran rather than the sophomore making his first career start. The quarterback was super-efficient and effective in the game going 12 for 15 for 204 yards, two touchdowns and a passer rating of 132.6. Davidson admitted he was nervous on the very first play of the game but he settled in immediately after; it was clear to everyone in attendance that Berthoud has their long-term answer at the most important position on the field. “We came out ready, we knew what we had to do, it’s all about practicing and all that work in the offseason; the win means a lot to us,” Davidson said.

Ticnor praised his quarterback’s play saying, “Darin Davidson is an amazing athlete and we’re lucky to have him on our team. Coach Matsunaka, our offensive coordinator, put together a game plan that got him some early passes that made him comfortable, gave him some reads he’s comfortable with and when you have a young quarterback you want him to have success early and he did a great job of putting him in spots to succeed and Darin did an amazing job of taking advantage of those plays and put some points on the board for us.”

Fort Lupton was able to scratch out a score early in the second quarter when lead tailback Antonio Gonzales found the endzone on a second and goal from the two, but that was all the Blue Devils could muster.

Following the game, Ticnor explained that he and his staff had some concerns about Fort Lupton while doing their scouting work and putting together the week’s game plan, particularly when it came their opponent’s option offense that employs a lot of side to side concepts that couples nicely their overall team speed.

“Coach O’Connor has Fort Lupton looking pretty good right now, that was something that had us worried as a coaching staff as we scouted them this week, and we looked forward to playing a quality opponent,” Ticnor said. On the night, the Blue Devils did accumulate 160 yards on the ground, but it took them 54 rushing attempts to do so, resulting in a paltry 3.0 yards-per-run average.

Glasser scored Berthoud’s final touchdown of the game just before halftime, sending the Spartans to locker room with a 34-6 lead. In the second half, Berthoud slowed their pace and worked on the clock. The final two points the Spartans scored came when defensive lineman Matt Pelphrey burst through the Blue Devils front, secured and tackled quarterback William Alvarado in the endzone for a safety.

All in all Berthoud had to be pleased with their first game. “We brought more of our playbook out, we executed even better than we did last week. We had a great week of practice, we made the best of us, and we came out and it showed tonight,” said Coble, who contributed in all three phases of the game as a running back, linebacker and placekicker – where he was a perfect six-for-six on kicks. “We get stronger and stronger every day, as we keep working, every day we come out of that locker room to practice and keep getting better.”

Berthoud will be off this Friday for their bye week and will travel to Woodland Park for an afternoon contest on Saturday, Sept 11. The Spartans will be back at Max Marr Field on Sept. 17 for a matchup with archrival Thompson Valley.