“It’s fun to have everybody’s kids going out there with their faces painted rather than the apples hitting the ground and going to waste,” said Blayne Selby, co-owner of Willow Farm Orchard, 900 N. County Road 19, a farm in Berthoud named for a large willow tree on the property and a horse called Willow. 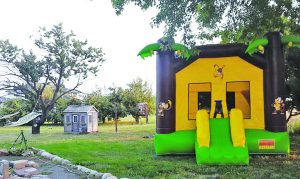 Courtesy photo – Willow Farm Orchard has apples for sale, plus cider and carmel apples, during daily family events at the Berthoud farm through the end of October.

Fifty-five apple trees on the five-acre farm produce an average of 50,000 apples every other year and a quarter of that during off-years. This year, Selby and his business partner are selling the apples Sunday to Wednesday from Labor Day through the end of October and may add Saturday to generate even more business. During apple-selling years, they typically sell apples for eight to 10 weeks, alternated in the off-years with selling pumpkins from their pumpkin harvest.

The apples are sold prepacked by order and pick-your-own, where guests can bring bags and fill them for a $15 entry fee or trade them for three of their own pumpkins. If visitors want a half-dozen apples or less and to buy apples only, Selby often will charge a smaller fee.

The apples are Gravenstein, a triploid apple cultivar with a tart flavor that can be eaten straight up or used as a cooking apple in things like pie, applesauce and apple cider. They also are used in canning and for caramel apples.

“It’s a high-character apple with lots of different characteristics,” Selby said. “Most have one trait, sweet or crisp. These supposedly have the traits of all apples all in one.”

Gravensteins, around since at least the 1600s, were the most available apple in the early 1900s and grown in orchards in California, Selby said.

“They were easy to grow and hardy, but, however, in the mid-1900s they faded away when farmers started mass producing more apples, like the Red Delicious,” he commented.

Selby and his business partner bought the farm seven years ago when it had 75 apple trees. Not knowing what the trees were, they ended up cutting down about 10 of them. They’d made the purchase in the fall, but when the trees blossomed the next spring, they realized what they had. They let the apples hit the ground the first couple of years, but realized it was a waste of good food.

So, Selby cleaned up the trees—some were small or low-producing—and pruned the remaining producing trees. Initially, he offered the apples free to the community over a weekend, but then decided to sell them as part of a larger event. This is the third time for the event sale, which doesn’t have an official name.

“I’m just amazed at how a bunch of trees that were not being used for anything can be turned around into a huge event that the whole community loves to come out and enjoy a variety of fun things to do,” Selby said. “Everyone is so grateful that it has been shared for all to enjoy rather than just all go to waste. (It’s) so much more rewarding to establish something that can go to the good for all.”

The activities are many and are set up in stations throughout the property. They include a bounce house, hayrides, face painting, large-scale tic-tac-toe boards and other games like archery and a bean bag toss, crafts like painting pumpkins or dinosaurs on two-gallon jugs, and a variety of photo props.

There’s also a station for apple cider sales and one for caramel apples topped with treats like crushed nuts and candy. For additional food items, concession stands are available with snow cones and cotton candy.

“The kids love that most of the events are just open for them to just walk up to any booth and run it however they like with little supervision,” Selby said. “(They’re) free to roam and just have fun.”