Wendy B Fotos – the fine art of capturing memories

Berthoud resident Wendy Boedeker travels Northern Colorado with her photography studio, keeping her equipment simple, as she turns black-and-white portraiture into fine art. “They’re artistic and just really high-end photography,” Boedeker said. “It’s not something you can do yourself. I doubt you can get this on an iPhone.”

Boedeker brought her studio, Wendy B Fotos, on Dec. 1-2 to the Wildfire Community Arts Center, 425 Massachusetts Ave. where she is a member, during the annual Wildfire Local Artists Show, where Berthoud area artists sold their paintings, pottery, jewelry and other artwork. She took portraits at the arts center during the show’s reception on Dec. 1 and throughout the day on Dec. 2 exhibiting some of her work. 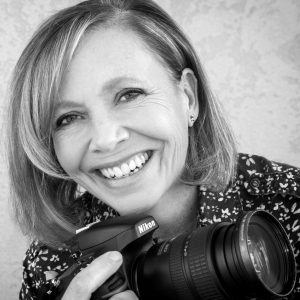 Boedeker focuses on black-and-white portraits of people of all ages, working mainly with children and families, but she also photographs adults. She uses a black backdrop and a simple light source. “That’s it, and me and my camera,” Boedeker said. “It’s just easy. For the ease of both the subjects and the people allowing me into their homes, I don’t want to lug around a lot of heavy equipment.”

Boedeker’s portraits are high quality as a result of the lighting she uses, her equipment and her talent. She has more than 35 years of experience as a photographer and takes an average of 10,000 photos a year — she estimates over a lifetime she’s taken hundreds of thousands of photos.

Boedeker opened Wendy B Fotos in January 2016 in Berthoud. Previously she owned and took portraitures as Wendy Schott Photography, which she began in 1993 and operated for more than 20 years, mainly working out of Evergreen.

“When you are with her, she makes you feel so special. You’re giggling and laughing. You don’t realize you’re doing it,” said Kappy Kling of Evergreen. “Within minutes you have this amazing photograph.”

Boedeker sets up five photo days a year at HearthFire Books and Treats in Evergreen, owned by Kling. Kling also hires Boedeker every year to take photos of her and her daughter for their Christmas cards.

“What makes her special is she makes it fun,” Kling said. “She captures an image so quickly and so real to life. She captures the joy. … She does beautiful work.”

Boedeker provided portraiture photography for Kerri Atkinson of Berthoud after she graduated this year from nursing school at the University of Northern Colorado, along with her two children when they graduated from high school.

“Wendy Boedeker is absolutely an amazing photographer,” Atkinson said. “I was nervous, and she made me feel so relaxed. She’s just so fun and easy. We had a really good time with it. The pictures are phenomenal. They’re absolute treasures. I’ll have them on my wall forever. “

Boedeker, born in the New York City area, studied photography at the former Brooks Institute of Photographic Arts and Science in Santa Barbara, Calif. She graduated in 1981 with a bachelor’s degree in illustrative photography.

As a child, Boedeker discovered her interest in photography in two ways — as a Girl Scout and as a cheerleader. At about age 10, she had sold greeting cards door to door for the Girl Scouts and earned a Hawk Eye Camera.

“From that moment on, it was just something I loved,” Boedeker said. “It’s been in my world ever since.”

During her junior year of high school, she was a cheerleader and the football coach asked her to be the team photographer during her senior year, which she did instead of varsity cheerleading. She also worked on the school yearbook and newspaper as a photographer.

After graduating from college, Boedeker worked as a freelance assistant to professional photographers and also as a set stylist for department stores, something she did for six years. She sidelined as a professional hand model for five years and had to wear elbow-length gloves whenever she was out in the sun.

She then opened her studio, using her previous name when she was married to her first husband, David Schott. She focused on photographing children and their families in black-and-white portraits.

“I had children and decided that I wanted to adapt my photography to my lifestyle,” Boedeker said. “I wanted to photograph children, so I could meet other moms.”

She met her second husband, Ken Boedeker, in 2011 and, two years later, they married and moved to Berthoud.

“I started Wendy B Fotos because of my last name change,” she said, explaining she also wanted to appeal to children with an image of a bumblebee next to the “B” in her business name. “I thought kids would relate better to Wendy B rather than Wendy Schott.”

Boedeker and her husband temporarily moved to Houston for one year in 2016 while he was on a work assignment. While there, she volunteered as a children’s photographer at Children’s Memorial Hermann Hospital.

“It was a gift the hospital gave to their patients,” she commented. “They just need to document that time in their lives.”

She retained her same photography style in her new business. “I like capturing moments, and it fills my heart and it makes me happy,” she said. “I do what I love.”

Boedeker can be reached at wendybfotos.com or [email protected]