They’ve been together six years. People often see them in a pasture along Berthoud Parkway where they stand together, a team of two. If one comes to greet you, the other follows. They seem to agree: together is better. Their differences are clear. Tracker, from the family Equidae, is a tall, charming fellow, wide in the girth with a tremendous rump. He cuts a striking figure in his coat of black and white.  An American Paint Horse. Daisy, from family Bovidae, is shorter with prominent hip bones (a common family trait), yet she is wider and heavier than her companion. A docile but mischievous Jersey cow. They are two members of the larger mixed family of Stephen and Marlene Charles of Berthoud.

The two aren’t complete opposites. Tracker and Daisy share a love of the outdoors, vegetarian foods, and each other, but their differences define them. Tracker is a gentle giant, placing his face within reach of your hand. Daisy likes to swing her head, seemingly unaware of her size and clueless as to the amount of damage this behavior could inflict. Sometimes she swings into Tracker’s meaty sides. It doesn’t affect their friendship. 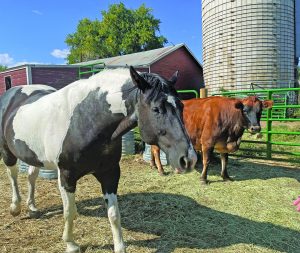 Photo by Sue Arnott – Tracker and Daisy in their usual side-by-side position.

“Tracker is really Tessa’s horse,” Stephen explained. “He only tolerates me because I feed him.”

Tessa Kuiken is Marlene’s daughter and along with Daisy, a huge Tracker fan. “I’d lost my last horse to colic. A terrible thing.” When she was ready for another horse, Tracker made the search easy. Along with his beauty came an uncanny empathy for others. Marlene, though sick at the time, accompanied Tessa on the horse-buying trip. Tracker made a beeline to nuzzle her. The deal was sealed. But they soon learned he wasn’t always calm. New environments, new sounds rattled him, like the time Tessa was in the barn with him and he knocked into a bucket and spooked. He bolted straight towards her.

“I put out my arms,” Tessa said. “I touched my fingers to his chest, and he stopped on a dime. It was like he knew he didn’t want to hurt me.”

Tessa learned about calming techniques. One of them involved standing close to him doing jumping jacks. Tracker learned she wouldn’t hurt him. His only anxieties now appear when he and Daisy are separated. He paces, he runs. Fortunately for Tracker, these separations are short. For the most part, they spend their days together in the pasture and their nights together in the barn.

As for Daisy, “I always wanted a Jersey cow,” said Stephen. “We had two. Not for eating or anything. They were my lawn ornaments.” He laughed. When the other cow died, he couldn’t say if Daisy was sad, but she took to Tracker soon after his arrival. “He was her playmate.”

A headstrong playmate at times.

“See those green metal poles over there,” Marlene said. She pointed across the paddock to what looked like a haphazard maze. “That used to be a round pen. Daisy likes to reconstruct things with her head.”

She means no harm, though. “People don’t realize how social and affectionate cows are,” Stephen said. Perhaps this is because they aren’t typically kept as pets. But it’s true. Cows, like horses, form tight and lasting social bonds, usually with their own kind. But more and more we see stories about (mostly) domesticated animal friends that don’t see or don’t seem to care about the differences. They model patience, affection and acceptance.

Tracker and Daisy are but two in a truly mixed family including members from Canidae (two enthusiastic and adorable dogs), Felidae (two friendly and formerly feral cats) and Leporidae (two quiet rabbits). But it’s Tracker and Daisy people see as they pass on their daily walk or drive and when they do, they can’t help but smile.