Six short months ago Heidi Zeller-Dart was ready to throw in the towel. Exhausted from investing time, energy and money into her counseling practice, Colorado Farm Therapy, and seeing little return, she had gone so far as to announce to her husband and friends she was quitting the business and finding something new on which to focus. 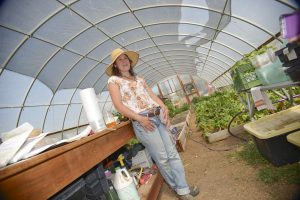 Heidi Zeller-Dart tends to her greenhouse, where she grows produce for the family business, Dart Farms, and visits with clients of her counseling practice, Colorado Farm Therapy. Zeller Dart was recently awarded as one of 12 ‘Women of Vision’ honorees by the Colorado Women of Influence organization for combining she and her husband’s goal of owning a farm with her dream of helping people.

Days later, an article torn out of Poudre Valley REA’s Country Life Magazine was slipped under the office door of Ann Clarke, founder of Colorado Women of Influence. The note was in response to a call to action, which Clarke had recently emailed to over 5000 people, seeking nominations for her organization’s 2017 Women of Vision award.

Clarke read the article – a story about Zeller-Dart and her dream of bringing farm therapy to Northern Colorado – and tracked down the nominator by way of a name scrawled on a sticky note and affixed to the magazine clipping. Three weeks later, Zeller-Dart received word she was being recognized as one of a dozen honorees out of 56 nominated.

“I had never even heard of the organization when [Clarke] called me to say I’d been nominated,” said Zeller-Dart. “Then she called me again weeks later and said, not only had I made it to the top 12, but I was in the top five. Her words were, ‘Pretty unbelievable considering no one knows you.’”

The Colorado Women of Vision award honors women in Northern Colorado who see a problem and decide to find a solution, or who act on lifelong ambition to achieve goals. The honorees are recognized with short video clips highlighting their successes as well as goody bags at the Colorado Women of Influence Gala each July. Over 100 women have been recognized as honorees over the past eight years.

Clarke said the selection committee chose the 38-year-old entrepreneur for her ingenuity in combining her husband’s and her goals of working the land and creating a healthy Community Supported Agriculture program (CSA) with her dream of helping people through a therapy program.

“The idea first popped into my head during my second year of graduate school at Denver University,” said Zeller-Dart. “I was getting my master’s degree in counseling and had taken an animal-assisted therapy course.”

It was during that course Zeller-Dart watched a video that ultimately guided her down her current path. It documented a farm in upstate New York where inner-city kids went to learn farm skills, but left with life skills.

The idea was popular in Europe but had yet to make a big appearance in the U.S. Zeller-Dart saw her niche and began to feed it. In 2013 she and her husband bought 10 acres west of Berthoud to bring their dreams to life.

“The land was all horse pastures and grass, but we got animals and started cultivating the garden, and I started looking and getting ideas in my head about what I wanted to create,” said Zeller-Dart. “I wanted to take the time to get to know the plants and animals and understand which ones could help facilitate the healing of my clients and which couldn’t.”

The couple brought in chickens, cats and 17 truckloads of 10-year-old compost from a dairy farm down the road which would prove indispensable to their second business, Dart Farms, where they’d soon begin selling high-quality produce at Berthoud Farmer’s Market and their on-site farm stand.

Shortly after, two more characters showed up on scene: Spot, a seasoned therapy Appaloosa from Boulder in need of physical rehabilitation, and Moon, an untrusting warmblood with a history of abuse and neglect. Spot would provide companionship to Zeller-Dart’s clients with physical ailments, while Moon would connect with those clients searching for their own emotional healing.

“I based my practice on the fact that each client is drawn to something different,” she said. “Some are really drawn to the chickens and some are drawn to the cats, and some only want to work with horses. A lot of the work is using that positive attraction that they have to create a relationship with nature that helps broaden their perspective.”

Zeller-Dart said keeping her fees low is imperative, as she doesn’t want to add another burden to her clients’ lives. She does this by allowing clients to meet with her as often or as little as they’d like, and by offering group sessions on Sunday mornings. Currently she offers a $10 Meditation Hour and a 90-minute Women’s Inner Wisdom group which focuses on psycho-spiritual topics occurring in daily life.

Zeller-Dart’s primary focus is women, ages 18 to 40, but she often works with teens as well.

“I have a couple adolescent boys with Attention Deficit Hyperactivity Disorder (ADHD) who just love it,” she said. “They can really explore and get their hands dirty. Sometimes all they need is to get away from the video games and be out in nature, and that alone is therapeutic.”

Zeller-Dart said she often catches a glimpse of what her clients are going through while observing them as they engage in nature.

“Little things will start to come out and they don’t even know they’re sharing this stuff,” she said. “I start to understand them better that way than having to sit them down and interrogate them.”

The calls of a heron swooping down on the private pond at the back of the property, a view of the sun setting over the Twin Peaks from a bench nearby, and a trail system for clients to meander through all contribute to Colorado Farm Therapy’s serene ambiance.

“A lot of times it’s easier to walk and talk,” said Zeller-Dart. “People get more into their bodies and less in their heads when they’re moving.”

In addition to practicing walking meditation on the trail system, Zeller-Dart’s clients might harvest flowers while assigning something they’re grateful for to each stem cut, creating a “bouquet of gratefulness” in a typical session, or spend an hour doing groundwork with Spot and Moon.

“I can see how clients relate to the animals and that shows me a lot about how they relate to the people in their world,” said Zeller-Dart. “Horses make some of the best therapy animals because they are by nature prey animals and are sensitive to their surroundings and to our energy. They pick up on it.”

Zeller-Dart said the time she spends in her garden also inspires much of the work she does with her clients.

“If you really spend a lot of time out here you start to notice the natural patterns and rhythms that are always present in nature,” she said. “It is always relatable to something that’s happening in our personal life. If I find my experiences to be beneficial to me then I start to try them with my clients.”

While marketing such a unique program has proven difficult for the farm therapist at times, Zeller-Dart has never stopped dreaming about how much bigger the program could be. In the future she hopes to create more group sessions throughout the week on topics such as conscious parenting and gardening as a spiritual practice. She’d also like to invite residents of nursing homes out to the handicap-accessible property to experience nature in a way they don’t often get to.

“I’m still trying to build my caseload, but I feel like this is still young,” said Zeller-Dart. “My husband and I always knew this was a five-to-10-year project, but I feel like I’m on my way. The award is reinforcement for us that it’s going to happen, there’s a need for it, and people are interested in it.”

Clarke said the goal of the Women of Vision award is to serve as affirmation for honorees in all stages of achieving their dreams that they’re on the right path, and they can overcome any obstacle.

“Some of these women are bigger than life and some are like [Zeller-Dart], focused on what they want to do, very quiet and we have to drag them kicking and screaming into our spotlight,” she said.

While Zeller-Dart never asked for or expected the attention, being honored by the organization was like being thrown a lifeline.

“There was a time over the winter when my practice hardly had a heartbeat,” she said. “After receiving the award, getting four new clients, and beginning to slowly grow and piece it all together, it’s like the universe is telling me don’t give up. This is happening.”