A few Berthoud Elementary School students played with numbers instead of basketballs as they made it to the Elite Eight before getting eliminated.

The 15-member team stayed in the game for two months until Dec. 16 when they faced off against St. George’s Junior School in Vancouver, British Columbia. 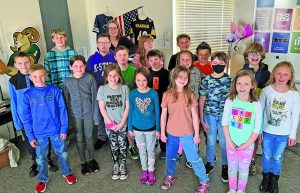 “We only lost 34 to 30, so they didn’t crush us,” said Patty Cooley, talented and gifted specialist at Berthoud Elementary and Berthoud Eagles coach.

The Berthoud Eagles competed for the first time in Math Madness, a national online, team-based competition that takes place each fall and spring at the elementary, middle and high school levels with the elementary level limited to grades 3-5. The competition, in its eighth season, is sponsored by American Mathematics Competitions and Aretelabs.

“They’re allowed to work with a partner or a small group, then after that, when the real competition started, they had to work by themselves,” Cooley said.

The teams are given 30 minutes to solve seven to eight multiple choice and fill-in-the-blank questions, and the team score is calculated by summing up the top five individual scores. That scores counts against the top five scores from the opposing team to determine the winner.

“They’re pretty complex problems,” Cooley said. “They’re standard spaced, but they are all word problems. You’ve got to figure out what you’re doing in order to make it work.”

The problems at the elementary school level are based on the common core standards and cover all strands of mathematics, including place value, geometry and algebra.

“The problems were definitely at a very much higher level than most,” Cooley said. “This gave kids the opportunity to take material from a standards standpoint at their level and take it to a deeper level than they would get from the classroom experience.”

The first two weeks of competition were for the qualifying rounds.

“(They) didn’t count to get a feel for the difficulty, to see what the questions are like, but then by the end of October, it was actual real competition,” Cooley said. “When it really counted, we had a string of wins from Nov. 4 to Dec. 16. We lost on Dec. 16. That’s when we got eliminated.”

Math Madness follows the elimination rounds of March Madness with the Sweet Sixteen, Elite Eight and Final Four, creating the same fanfare and excited for the mathletes as the athletes, Cooley said.

“The kids’ energy was amazing,” Cooley said. “They would talk about the problems afterward. … Seeing them share ideas about math and working on it, it was fun for me to watch them be so into it.”