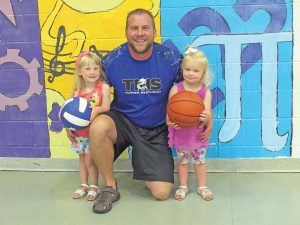 Turner Middle School athletic director and dean of students, Steve Frye, with the help of daughters, Victoria and Violet, get ready for the
new school year.
Bob McDonnell / The Surveyor

Anyone who meets Steve Frye, the new athlete director at Turner Middle School (TMS) immediately realizes he has two passions in life — kids and sports. This makes him a great fit for the job at TMS.

Frye’s route to become both the athletic director and dean of students is not a straight line. He had some detours along the way.

His family moved to Loveland in 1983. Frye attended grade school, middle school and then graduated from Loveland High School (LHS) in 1998. “I’m a Thompson (school district) product all the way,” he proclaims proudly.

Frye attended the University of Idaho on a football scholarship. After one year there, he transferred to the University of Northern Colorado (UNC) in Greeley. He stayed at UNC, completing his degree serving as graduate assistant under Coach Kay Dalton. He coached the team’s defensive line.

A change he terms as a coaching shift at UNC caused Frye to leave the school and work in the private sector. He did outside sales for 11 years.

Frye remembers the day, while working, he realized he was not happy doing sales. “I was successful but hollow,” Frye said. He also realized his real passion was for leading and working with young people. So, at age 27, Frye decided to go back into football.

Frye visited the Colorado Ice Indoor Football team. He says, “I told them I wanted to play football.” The Ice signed him to play after a tryout. It was a good decision for both the team and Frye. He played for three years, including two all-star games.

This renewed Frye’s desire to get back into sports. An opening at Fort Collins High School caught his eye. LHS standout athlete Dave McCloughan heard of Frye’s plans. McCloughan coached Frye at LHS. He told Frye Loveland would be better for him.

So, in 2012, Frye joined the LHS football coaching staff, with John Poovey as the head coach.

Frye also took a leap of faith and became a substitute teacher in the Thompson District. He said it now seems ironic his first assignment as a sub was at TMS. “I walked into the building that day and never left,” he said. Frye acknowledges and thanks then TMS Principal Bill Siebers for giving him that first job.

To become eligible for full-time employment in the district, Frye spent most Saturdays for a year in Greeley at the Board of Cooperative Education (BOCES) office taking classes. After completing these classes, he attained his teacher’s license. Last year Frye was signed as the full-time physical education teacher at TMS.

Frye is excited about his new position as athletic director and dean of students at TMS. He will still be in the classroom teaching physical education. The before-school muscle lab, which Frye started, will continue. He has plans to expand it this year too.

Looking at the coming year, Frye mentioned the TMS wrestling team. He coached this group in his first year at the school. He recalls starting with six students coming out for wrestling. Frye’s face lights up when he says this year he hopes for 50 wrestlers.

In the past, Frye has been involved with coaching Berthoud High School (BHS) football. After accepting his new role at TMS, Frye decided not to coach at BHS this year. He says he wants to focus all his efforts on the new job. He has not ruled out the possibility of someday returning to the BHS coaching staff.

When asked what coach or athletic director helped him mold his style, Frye answered, “All of them.” He mentions the influence of UNC’s Jim Fallus and Jay Heinrichs. Additionally, he noted that LHS Athletic Director Gene Alvine was outstanding as well as his replacement Devin Anderson.

Frye is spending time this summer prepping for his new job. He can be seen in the halls and in the gym at TMS frequently. Some days his two young girls Victoria and Violet accompany him. Frye’s wife Christine is a pediatric occupational therapist, so the girls like to tag along with their dad during the summer.

Frye is grateful for the chance to live out his dream of being an educator and coach. He summed up his route from high school athlete to his current role at TMS in one sentence − “The Berthoud community saved me.” He is back on the path of doing what he loves.