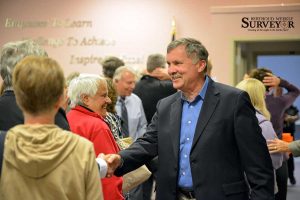 The Larimer County League of Women Voters held a Thompson School Board candidates’ forum Tuesday night where each of the eight candidates vying for four open seats made their case to the public.

The forum was held at the Thompson School District Board of Education boardroom where frequent outbursts and arguments are more common, but Tuesday’s forum was a civil and cordial evening for the public to get to know some of the candidates’ views on hot topic issues.

Randall stated that she loves the American education system because it’s the tread that sews the culture together, but it’s currently being torn apart. She said there are a couple of things threatening the education system, including high-stakes standardized testing.

“This testing has taken the student/teacher relationship that we know, and it’s turning it into a relationship of scores and numbers instead of that nurturing one we’re used to,” Randall said.

Her opponent, Swanty, said he wanted to improve the relationship between the board and the teachers in the district.

“Teachers are altruistic,” Swanty said. “They are here because they love children, they love teaching, they’re in it because this is something they want to contribute to society. But I feel like we are not treating the teachers in the Thompson School District like they deserve to be treated.”

District C candidate Montagu, a TSD grad, said her experience on the board for her first term was a “learning experience” that will help tremendously in a second term.

“My four years on the school board has been an education in school-board governance, and I have worked hard to be available and visible throughout the district so I can serve from a place of knowledge and understanding,” Montagu said.

Her opponent, Hansen, also a TSD grad, said he decided to run because of his experience as a student in the district, and he currently has two children attending district schools. He said it’s important that every student receives a great education.

“I want to see each and every child have the opportunity I had, no matter what school they go to,” Hansen said. “I want to see teachers rewarded for the extra things they do and I want to see students feel good about themselves.”

District D candidate Grundvig said she’s running because of her passion for education, which she credited to her father who used education to rise out of poverty. A mother of five, most of who attended or attend district schools, Grundvig has worked as a school nurse and a substitute teacher.

“I love the community of Loveland and want to see this community reach its potential and be the best it can be,” Grundvig said.

Grundvig’s opponent, incumbent Howard, a mother of three who’ve all attended district schools, said she’s seeking reelection because she wants to ensure each student is given the opportunities her children had.

“All three of my children received an exceptional education from Thompson K-12,” Howard said. “I’m committed to ensure that that opportunity still exists for all of our children and all of our youth in this community.”

District G candidate Finger was more specific, saying that through speaking with parents in the district, safety is the number one concern parents bring up.

“When they take their child to the school bus or they drop them off at the school in the morning, you know what they want? They want to be able to pick up their student at the end of the day. They want them to be safe, happy, and better educated,” Finger said.

He said also that academic excellence and financial transparency are other areas he possesses skills to help the district improve upon. He said district taxpayers deserve accountability and information about how and where their money is being spent; something he believes isn’t currently the case.

“This is a fair expectation and we have a difficult time doing this today,” Finger said. “People don’t understand where we are, and I have the background and the financial skills to help fix this.”

His opponent, Levy, called education “the cornerstone of the future,” and he’s running to make sure succeeding classes of students have the same education opportunities afforded his two children: one who is now a senior at Colorado School of Mines, the other is a 2015 Berthoud High School graduate and Boetcher Scholarship recipient studying at University of Colorado-Boulder.

He said he believes the school board should be a represented cross-section of the community, and his experience as a registered professional engineer, where he worked as project manager for mulit-million-dollar projects and the ability to bring people to consensus are valuable to the board.

The first to answer was Hansen, who said he’s never used the word “reform” to describe himself, but he thinks the board should evaluate everything and its effectiveness for the good of students, teachers, the district and taxpayers. He added that his focus was first and foremost to make sure each student receives a quality education, but also to restore some civility to the board.

“I’ll focus on bringing civility to the board,” Hansen said. “We can’t rule our school district if we can’t even talk to each other.”

His opponent, Montagu, said her focus would be to change the board policy that gives the board president ultimate authority of what appears on the meeting agendas and to take away the president’s authority to silence a board member.

“I think that is not right,” she said. “I think we all represent a segment of this population in this district and we should all have a say, so I would first and foremost repeal any of the board policies that relate to that ultimate power.”

Both Montagu and Howard said they would also like to see removal of the board attorney, Brad Miller, because having counsel specific for the board is unnecessary.

Howard said she wasn’t affiliated with any party, movement or platform other than the platform of students and families, and that she would like to see the board follow Roberts Rules of Order, following the policies currently in place, as well as removal Miller.

“I think those three things would allow us to encourage innovation, bring back the morale to the district, and bring back respect to all shareholders,” Howard said.

Howard’s opponent, Grundvig, said she has been categorized as a reformer but she hasn’t and wouldn’t use that term.

“When I think of the concept of reform, I think of something large and drastic, and those are not things that I want to see, or have seen,” she said. However, one change she feels is important is to find more ways to use the district’s best teachers more effectively.

As for Finger, he classified himself as a “continuous improvement” candidate because that is how he succeeded in his 37-year career at IBM.

“Constantly looking at how we get better,” he said. “I think we spend too much time looking at ourselves; looking at the board, worrying about the things that are up here and not enough time looking at students and their achievement, at their safety and at things they could do better.”

His opponent, Levy, said he’d like to work with Superintendent Stan Scheer to come up with a plan on what he thinks needs to improve, and develop one-year and three-year plans to determine what resources are needed to accomplish those plans, along with grappling with the district’s budget that is currently using up reserves to cover expenditures.

“The board needs to come to grips with that very important issue,” Levy said of the budget issues.

Levy added that the district needs to restore a good working relationship with teachers.

“The board can provide no better service than to create an environment that attracts, hires and retains the best teachers available,” Levy said.

District A candidate Randall said she would like a more direct line of communication between the board and teachers.

“There is a lot changing in education right now, and I’ve been through change in the corporate environment; it’s difficult to navigate, and I think communication is key in that,” Randall said.

Randall added that being labeled a “Reformer” is strange since she’s actively tried to keep education the same.

“I’ve been fighting the reforms coming down from the federal level,” she said. However, she indicated there are areas that need reform, including district transparency.

Her opponent, Swanty, said remaining independent and bridging the two sides of the board is something he intends on doing if elected.

“I want to help us all find some common ground so that we’re all working toward the good of the district again,” he said.