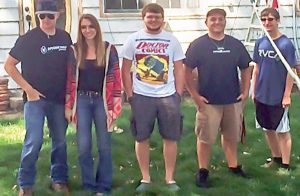 In the summer of 2015, six Berthoud High School STEM students joined the astronomy internship at the Little Thompson Observatory (LTO) hoping to further their knowledge of radio astronomy. During their internship, one of the student teams stumbled into a groundbreaking discovery of a phenomenon that contradicts previous scientific research on the expansion of two nebulas in the solar system.

The team’s discovery of the slower expansion rate of Cassiopeia A and Rosette nebulas has received them an invitation to the International Radio Astronomy Conference in this month. It is possible they are the first high school students to ever be invited.

“Their advanced research was extremely impressive and their original discovery of anomalies in two nebulas should contribute significantly to the science of radio astronomy and lead to further insight into the dynamics of the universe,” said Bascomb “Jay” Wilson, LTO volunteer.

The second team of students was recognized by the National Aeronautical Space Administration (NASA) where their research regarding meteor detection was published on NASA’s website.

The LTO specializes in 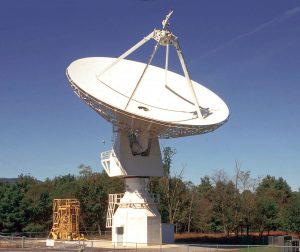 Pictured is the 20-meter dish at the National Radio Astronomy Observatory in Greenbank, W. Va., the students used through a program called Skynet Junior Scholars to study hydrogen (HI) emissions from radio signals from Cassiopeia A,
the Crab Nebula, and the Rosette Nebula.
Courtesy photo

astronomy techniques and expertise. Radio astronomy is the scientific study of radio wave emissions from objects in space, which gives insights to various aspects of a celestial object that is otherwise not visible.

The first astronomy team’s members, Xander Pickard, Sierra Messick, and Zachary Marquardt, used LTO’s remote access to a 20-meter radio dish in Greenbank, West Virginia through a program called Skynet Junior Scholars to study hydrogen (HI) emissions from radio signals from Cassiopeia A, the Crab Nebula, and the Rosette Nebula. They were allowed 24-hour access to this radio telescope and were even allowed to access the dish from home for research.

Several days into their investigations, they discovered an anomaly after inputting data collected from the dish, revealing that the line of hydrogen had a double peak. The instructors encouraged the students to go back and recalculate, believing that there must have been a mistake. After several recalculations they came to the same conclusion. Both the Rosette Nebula and Cassiopeia A Supernova were showing a double peak on their charts which the students could find no previous research on. Their data revealed an expansion rate slower than those previously recorded. Previous research on the nebulas had been done with x-ray and optical telescopes capturing data of the side-to-side velocity of expanding clouds of gases. The students believed the double peak in the graph indicated the front-to-back velocity of those expanding clouds of gases, something previously undocumented in astronomy research.

“It was dramatically different forward to back. The expansion wasn’t symmetrical. They really stumbled onto something,” said Veldhuis.

The second astronomy team, Jake Fiechtner, Collin Miller, and Lexia Wyse, endeavored to collect data on meteor counts using radio signal reflections from meteor trails and began to develop new instruments and programs that would help them measure data from meteors without radio or light pollution. Terry Bullet, along with the students, designed advanced antenna to pick up the radio signals, as well as computer software called the Echo Program, that filtered out some of the radio pollution. These innovations allowed them to detect 23 percent more meteors in the sky than their initial research.

These student’s successful and advanced experiments were featured on the online December issue of NASA’s Radio Jove Bulletin showcasing their research on what they call “meteor scatter”, which happens when radio waves reflect off of the ionized trail of a meteor which indicates the meteor’s existence in radio waves.

According to instructors, the students spent several hours last summer researching and collaborating on this project. The teams would come together, create hypotheses, and then bounce them off of each other, critiquing and conjecturing using high-level critical thinking. By the end of these sessions, the teams had enough data to do a thorough analysis of their findings. Wilson notes that these approaches are graduate-level processes, not typical of what would commonly be seen among high school students. “Exceptionally intelligent students who were inspired by good teachers,” said Wilson.

The student team that made the nebula discovery has been invited to Prescott, Ariz. to present its scientific paper on radio astronomy at the International Radio Astronomy Conference in March. The students traveling to Prescott to present this groundbreaking research are Collin Miller and Xander Pickardt. Because of this international conference, their paper will be published and will have worldwide distribution.

“This will be a research project for Ph.Ds and dissertations will be done on it,” said Wilson. Because the students have done as much as they can with the equipment available to them, it will be up to others to further investigate and expand on their research.

At the LTO Star Night on Jan. 15 the students presented their findings and answered questions to a crowded Observatory room.

“This was a cool opportunity to get involved and study something that isn’t really known,” said Fiechtner. The students showcased their research including images of the velocity formulas they used and the graph of hydrogen emissions which revealed their discovery of the double peak in the hydrogen line.

“The results for Rosette and Casiopea were different than the others, with a double peak in the hydrogen line,” said Pickard.

Berthoud High School Principal Chris Garcia, as well as other staff, supported the students by attending the presentation.

“It was a wonderful presentation and very well received.” said Veldhuis. Video of the Star Night including the students’ presentation can be viewed online by clicking the YouTube link at the bottom of the www.starkids.org page. The video is titled: “2016.01.15 Radio Astronomy at LTO and Berthoud High School.”

“They were taught how to think, not what to think,” said Wilson. Wilson observed how remarkable it was that the students developed their own research strategies for both using the 20-meter dish to measure velocity of hydrogen emissions and the development of equipment and software for more accurately looking at meteors in the night sky despite light and radio pollution.