Preparing for the worst 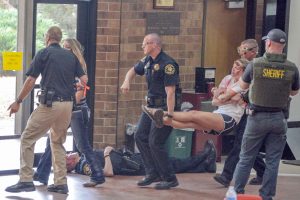 “The safety word is orange,” Larimer County Sheriff’s Office Sergeant Brad Harkin told a group of volunteers seated in Berthoud High School’s (BHS) cafeteria Tuesday afternoon. Each of the volunteers had an orange band tied to their left arm, indicating participation in the incident simulation.

A group of about 30 volunteers gathered to participate in an active-shooter training exercise coordinated by the Larimer County Sheriff’s Office, and help create a realistic atmosphere inside BHS, to simulate an actual event.

“These instances are dynamic; every year they change a little bit in what those threats are,” said Larimer County Sheriff Justin Smith. “So, we’re making sure that we keep our focus and that the other agencies are up-to-date, including the state patrol and the other agencies that are here today, because that is the reality with these situations. Those folks are going to be a part of the response as well.”

Coordinating incident command, communication, and understanding protocol in these situations is key to successfully diffusing the situation. Coordinating between all agencies is a key to that success.

“We recognize that if there was a school shooting in Berthoud, it would include these organizations,” said sheriff’s sergeant and exercise coordinator, Ian Stewart. “To us, it’s important that we have common training and we do everything we can to build those relationships with those other agencies that we depend on so much.”

According to Stewart, these types of school shooter trainings are imperative to prepare today’s law enforcement officers. And with the sheriff’s office now providing law enforcement in Berthoud, training at the high school was a valuable opportunity.

“Unfortunately, these types of situations are becoming more and more commonplace in our society, and it’s our responsibility to make sure that our officers are trained to handle them,” Stewart said. 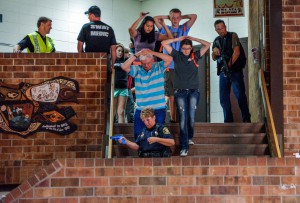 The training started at 8:30 a.m. with officers being separated into groups, with each group going through five different hour-long training stations. Each station focused on specific aspects of an active shooter incident including: establishing a medical triage station, establishing and setting up an incident command system, tactics on active shooters, and a “lone wolf” scenario where officers were educated on tactics specific to situations where they may be the first responder with backup 20 minutes out.

According to Stewart, the lone-wolf situation is an aspect that is generally reserved for more rural areas where first responders may arrive on scene alone, with their closest backup several minutes away.

Building relationships between agencies is another aspect of training. It also allows for officers to familiarize themselves with other agencies and how they communicate in critical situations. It also provides officers with a specific school’s layout, so if an event ever occurs, they are not walking into an unfamiliar building.

The day culminated with a full walk-through incident complete with volunteers acting as shooters, victims, concerned parents, teachers and students that lasted about an hour.

While the training was extensive and comprehensive of what the officers learned earlier in the day, these types of situations are always difficult to prepare for, according to Stewart.

“Can we ever be 100 percent prepared for everything? No,” Stewart said. “But, we can be better prepared for something like this.”

Stewart indicated that the day’s final scenario is the best way to prepare; it’s also used as an indicator of strengths between the various organizations and also highlights deficiencies.

“This final scenario is a litmus test on all those [previous] scenarios,” Stewart said. “Looking forward it tells us what we need to do better, what do we do well, and where do we need to focus our training in the future.”

Sheriff Smith said the sheriff’s office has performed similar trainings annually for at least a decade. But, he said, Tuesday’s training was more comprehensive and included several more agencies than in the past. He said that school shooting training is very specific as well.

“The actual clearing of the building isn’t significantly different than what we train for on a daily basis, but how we coordinate this type of incident, when they get going with so many people, can be very chaotic,” Smith said. “If you’re not controlling that from the top down, you run into utter chaos. So that is the challenge, bringing all these things together.”

A second training exercise is scheduled for July 8 at Wellington Middle School. And, if interest is high enough in future trainings, Stewart said the trainings may be expanded to include more fire and EMS personnel.

Sheriff Smith was impressed with the day’s training and said that his officers, working with other organizations on recent non-criminal incidents in the past couple of years, starting with the High Park Fire in 2012 and the 2013 floods, have performed well. But training specific to school incidents is extremely different and is necessary training these days. But, in real-life situations, there isn’t a safety word.