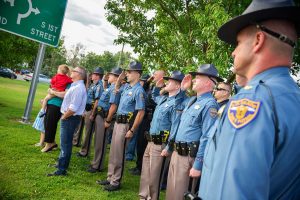 Colorado State Patrol Maj. Tim Keeton commands officers and fellow troopers in attendance to salute a flag dedicated to CSP trooper Taylor Thyfault at a dedication ceremony on July 24 at the corner of Mountain Avenue and Second Street in Berthoud. A second flag was dedicated to trooper Clint Rushing.
John Gardner / The Surveyor

The constant sound arc of passing vehicles along Mountain Avenue broke the silence as a group of Colorado State Troopers, Larimer County Sheriff’s deputies, and Berthoud Fire Protection District personnel bowed their heads in a moment of silence the morning of July 24 at the corner of Second Street in Berthoud. The two dozen officers, family and friends, gathered to dedicate two American flags to two patrol brothers; Troopers Clint Rushing and Taylor Thyfault.

Law enforcement officers of any uniform are, after all, a family. 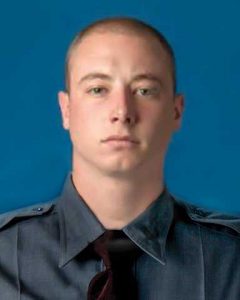 “Our motto is: ‘It’s our family protecting yours,’” said Maj. Tim Keeton with the Colorado State Patrol. “This represents the fact that we absolutely are a family and we see that – unfortunately and most significantly – in our darkest hour.”

Laurel Downer, American Legion Auxiliary, Justin Bauer Memorial, Post 67 president, presented the flags to those in attendance before they were placed on light poles at Mountain Avenue’s east end. She thought it appropriate and necessary to recognize Rushing’s and Thyfault’s service to their country.

Any given day, between Memorial Day and Veteran’s Day, American flags adorn both sides of Mountain Avenue. The flags are dedicated to veterans of the

United States Armed Forces to recognize their service. Thyfault, 21, an Army veteran, and Rushing, 37, currently enlisted with the Colorado Army National Guard, were recognized for their service, not only as part of the U.S. armed forces but also as their service to the community as law enforcement.

“It’s just our way of thanking them for what they’ve done for our country,” Downer said. 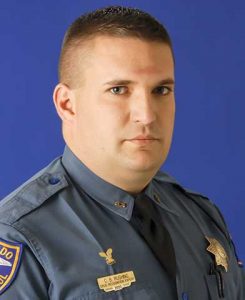 Thyfault was killed after being struck by a car driven by Christopher Gebers, 27, on May 23 as Gebers evaded police who attempted to stop him in Weld County. The incident occurred on Highway 66 near Longmont where Thyfault and Rushing worked an earlier accident. Gebers is charged with vehicular assault and vehicular homicide in the incident, among other charges.

Rushing’s family attended Friday’s ceremony. His wife declined comment, saying only that she was thankful to the community for its support and prayers. But many troopers had emotional responses to the dedication.

“It’s an absolute honor for us to have two troopers recognized in this way,” said trooper Josh Lewis. “It goes to show the dedication to the service and certainly to this community that recognizes what they do on a day-to-day basis.

“Seeing a community pull together in order to remember these guys and what they’ve done is an honor for us all.” 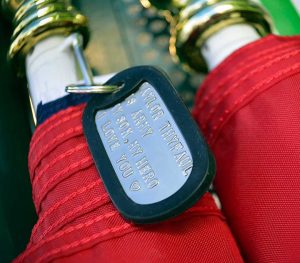 The dogtag attached to the flagpole of Taylor Thyfault is pictured with an inscription.
John Gardner / The Surveyor

Troopers said Thyfault’s last act was notifying a tow-truck operator to get out of the way just before being struck by the vehicle. The operator was unharmed.

Denver’s 7News reported Thyfault was promoted to the rank of trooper at his funeral on May 29 in Lafayette. Colorado State Patrol Chief Scott Hernendez said Thyfault’s actions that day defined the man he was and the kind of trooper others strive to be.

“His actions were that of a trooper that day,” Hernendez said. “We are honored to be wearing this uniform with him because of his actions; because that’s what Colorado State Troopers do.”