New town clerk, Christian Samora, is on the job and happy to be in Berthoud

On Aug. 22, 2017, Town Administrator Mike Hart announced Christian Somora has been selected from a pool of candidates to fill the position of town clerk. 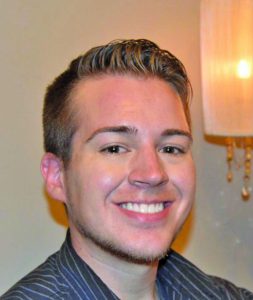 “Samora was a finalist for the clerk’s position and is well qualified to serve the community as the town clerk,” stated Hart in a press release. He was expected to start work in Berthoud on Sept. 25, 2017, but reported to work a week early on Sept. 18.

Before accepting the clerk position in Berthoud, Samora held the position of deputy town clerk for the mountain community of Salida, Colo.

Salida is roughly the size of Berthoud. The town clerk of Salida is an elected position and largely ceremonial with few official duties, so the deputy clerk functions as the town clerk in most instances. As a result, Samora has “hands-on experience with municipal elections, liquor and medical marijuana licensing, records management, municipal court, CORA (Colorado Open Records Act) training and municipal legislative processes, states the press release.

At the time the Salida job opened Samora stated his intentions were to find a position with a Front Range community. However, the Salida position was too good to pass up. He decided to work as the deputy clerk in the mountain community for three years and begin the search for a clerk’s job along the Front Range again. He was about to begin looking when a friend sent him an email to alert him about the Berthoud opening.

He admitted the job in Salida was not easy to leave. He had come to enjoy the job and really liked the people, so leaving there was sad. At the same time he was excited about working in Berthoud.

Samora grew up in Swatch, Colo., and attended college in Alamosa. Besides his three years in Salida he has also done a three-and-one-half year term as clerk in Center, Colo.

He stated he prefers Christian to Chris, but will not correct anyone who calls him Chris.

He would like Berthoud residents to know he is excited to work with and for them, as well as town staff.

On a sadder note, the recently-hired deputy town clerk, Daniele Kravig, has decided to accept employment elsewhere. Her new job sounds like it will be a good fit for her and we wish her all the best life has to offer.