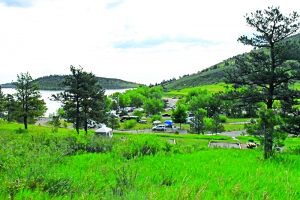 The South Shore Campground at Carter Lake will receive a much-needed facelift late this summer as one of the final projects remaining in the 2007 Larimer County Parks Master Plan.

The campground, which currently consists of 24 standard electric sites and six tent sites, is slated to receive a new loop with 22 new sites in the field south of the campground pavilion as the key improvement in the $1 million project.

“The last time the Carter Lake campgrounds were updated was sometime back in the early 1990s,” said Carter Lake District Manager Dan Rieves. “The South Shore Campground in particular has had almost no improvements whatsoever in over 15 years.”

According to Rieves, the idea behind the renovation is to improve and update the existing campground without making any drastic changes.

“South Shore is probably the most popular campground at Carter Lake, so we’re really trying to honor things that work well there, and not fix things that aren’t broken,” he said.

In addition to the new loop, next year’s campers will be welcomed by new layers of asphalt on existing roads and renovations to existing restrooms, as well as one new vault restroom, organizational improvements to the day-use boat-trailer parking area, and a large gravel parking lot.

Rieves said the boat ramp may also be redone to extend the second lane down into the water, but that project is dependent on water levels throughout the year which are controlled by the Bureau of Reclamation.

“I think it’s important for people to understand that we manage the Carter Lake area and other areas as part of a cooperative agreement for the Bureau of Reclamation, not just Larimer County,” said Rieves. The rolling 25-year management plan between Larimer County and the bureau have been in place in perpetuity since 1954.

In preparation for the project, Larimer County Department of Natural Resources announced the South Shore Campground will be closed beginning Sept. 5 of this year. Rieves said he expects the renovations to begin the second week in September.

“We’re not out to bid for a contractor yet, but we do plan to get started as soon as we can after Labor Day,” he said. “Our plan is to be open by spring with very little interruption to the prime season.”

With the 2007 Master Plan nearly complete, Rieves said he’s beginning to look ahead to the 2017 version which was recently released as a public draft. The plan calls for nearly 25 additional acres in the Carter Lake area to be developed for facilities and use areas over the next decade, which would include parking spaces, boat storage racks, and new trails, among other things.

The county is accepting comments and suggestions on the 2017 version of the Master Plan through Aug. 7. A complete version of the drafted plan can be found at www.co.larimer.co.us/parks/Draft-Parks-Master-Plan.pdf.