I remember being a little kid sitting at a car dealership in Muncie, Indiana with my mom waiting on our station wagon to get an oil change watching a tiny, boxy tv in the bleak waiting area with the scuffed tile floor and the smell of grease and burnt coffee from the coffee pot in the corner floating on the air. In a less than inspiring space I was transfixed watching a very mellow sounding man with an interesting fluffy hairdo magically bring a beautiful mountainous landscape painting to life with spatulas and sweeping brush strokes. I was probably five or six years old, but I was completely engrossed.

The show was “The Joy of Painting” and the iconic painter was of course Bob Ross. The program, which began in 1983 aired for a whopping 31 seasons. It was produced by non-commercial, public television, and from the second season on was filmed by WIPB in Muncie just a few miles from the car dealership I discovered the painting guru at in my childhood.

If by some chance you’ve never heard the soothing voice and positive affirmations of Bob Ross as he, in less than 30 minutes, instructs painters on his techniques all while smudges of seemingly random colors on a canvas quickly emerge into a complete picture full of “happy little trees” I would highly recommend it. It’s been described as calming and meditative, and I completely agree.

The show was an enormous success and continues to be popular around the world even after the painter’s death in 1995 following a battle with cancer. 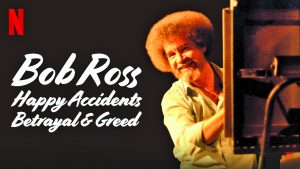 Ross himself has become somewhat of a cultural phenomenon resonating across generations. His likeness can be found on everything from socks to Chia Pets and has been mentioned or parodied countless times in pop culture including by actor Ryan Reynolds in a trailer for the 2018 film Deadpool 2. Several streaming services including Netflix have added episodes of the show re-titled “Chill with Bob Ross” and during the pandemic, the show was aired on BBC Four as part of its “Culture Quarantine Programming.”

A new documentary titled “Bob Ross: Happy Accidents, Betrayal and Greed” is available for streaming on Netflix and for a short time made me panic that the friendly, laid-back, animal and nature-loving man I had come to adore might not live up to his tv show persona. Thankfully that was not the case. If anything, it made me appreciate the former Air Force sergeant turned artist even more. However, as the title of the film implies, the business dealings of Mr. Ross and the ownership of his empire involved some apparent double-dealing on the part of his partners.

As a side note, one of the film’s producers is actress and comedian Melissa McCarthy and her actor and producer husband Ben Falcone who have on many occasions expressed their love of Bob Ross.

Much of the commentary comes from Ross’ son Steve, an artist and instructor himself who appeared more than a dozen times on his father’s show. He appears somewhat stricken as he tells his story. To thicken the plot from the start a bit of text appears on the screen explaining that more than a dozen friends and associates were asked to appear in the documentary but wouldn’t out of fear of legal retribution by the Kowalski family, who essentially discovered Ross, packaged him for TV and became his business partners and now have full ownership of the very lucrative Bob Ross Inc. including the rights to his name.

The documentary is fairly one-sided though corroborated by several people. In their defense, the filmmakers reached out to the Kowalski’s but received a letter declining to be a part of the project and hinted at legal action in return. Those folks who were close to Ross that declined were on to something.

The film contains lots of archive footage of Ross and photos from his life. Everyone from his first wife Vicky to friends and art historians weigh in throughout. The director Joshua Rofe does a good job of balancing the lighter moments reflecting on the joyful, charismatic man himself with the darker revelations about his legacy and the legal battles that ensued. One of my favorite, almost tear-jerker sections highlights how Ross’ positive attitude and encouragement through the show affected people’s lives helping them through hard times, depression and illness. It seems sappy but the people interviewed are so sincere in their appreciation even in a cynical world it’s hard to not feel your heart grow a few sizes while watching.

You won’t necessarily leave feeling great afterward as it does feel like there have been serious injustices committed but it is a good documentary about a highly unlikely star and likeable man who asked the world to embrace happy accidents and see the beauty in the world around us.