What’s a wassail and other holiday traditions

Holiday traditions come and go and have a way of evolving. Some of them remain in our collective holiday-conscious through songs and traditions and others have disappeared completely. The following are a few of those holiday season customs and the history behind them.

“We Wish You a Merry Christmas” is a well-known Christmas carol that includes a food item that you rarely see during Colorado Christmas celebrations, “figgy pudding.” Aside from the somewhat sketchy fact the carolers appear to be threatening a homeowner with more singing if they aren’t brought the dessert, I always wondered what exactly it was. As it turns out it usually doesn’t contain figs and isn’t what we Americans think of as pudding. Marketers would be horrified at both of these revelations. What it is, is a Christmas dessert that is also known as plum pudding or Christmas pudding and it’s a staple of British Christmas food traditions. In the British sense “pudding” is a dessert in general and not the creamy, custardy glob we think of in the United States. The original version contained dried fruits and spices and looks more like a fruitcake in the shape of a cannonball. In the modern era, Brits pour alcohol like brandy over the pudding and light it on fire. They know how to party.

Observing The 12 Days of Christmas 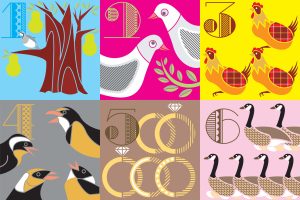 A copious number of birds and people seem to be gifted in the traditional Christmas carol, “The 12 Days of Christmas” but what are those 12 days all about? The Twelve Days of Christmas, also known as Twelvetide, is a festive Christian season celebrating the Birth of Jesus. In 567, the Council of Tours proclaimed the 12 days between Christmas to Epiphany (a Christian feast day that celebrates God becoming human as Jesus Christ and commemorates the Wise Men’s visit to Jesus) were to be an established festive season. The Catholic Church along with many other denominations celebrate these 12 days. Catholic scholars believe the carol was used to teach church principles in a form of code when Catholicism was banned in England. So, for example, two turtle doves were the Old and New Testament, nine ladies dancing were the nine fruits of the Holy Spirit spoke of in the Bible and 12 drummers drumming symbolized the 12 points of belief in The Apostles Creed.

I think I might start calling my Chihuahua by this name. This tradition has some very old roots. The practice came from Roman times when “social inversion” was used during the celebration of Saturnalia in mid-December.  Someone who didn’t have a high social status or a child was elected to oversee the party and cause some mischief. Eventually, this evolved into poor people light-heartedly demanding figgy pudding and the like from the wealthy and in Europe, up until the 17th century a “lord” from a lower class or position was put in charge of making sure fun was had during the Christmas season. Traditions vary from country to county but the consistent element was that someone who wasn’t typically in charge got to be. Even today in some churches during the Feast of Saint Nicholas, who is the patron saint of children, on Dec. 6 a child from the congregation is selected to symbolically run the church for the day.

The Nutcracker has the “Dance of the Sugar Plum Fairy” and in “Twas the Night Before Christmas” visions of sugar plums were dancing in his head. But what is a sugar plum and from whence did it come. According to food historians, the sugar plums eaten from the 17th to the 19th century in Europe were more like candy. They were mostly sugar and no plums – kind of like “fruit snacks” in the modern era, simply because it’s shaped like a piece of fruit doesn’t make it that. They were made by pouring liquid sugar over a cardamom or caraway seed or sometimes an almond, allowing it to harden, and repeating the process – similar to dipping a candle only way tastier. What resulted was a goodie roughly the size and shape of a plum hence the name. They were pretty labor-intensive, and a luxury item generally reserved for special occasions like Christmas.

Christmas in the 1600s included wassail, a cider-based drink. Wassailing was the act of going door-to-door, singing songs, and offering the neighbors a drink from the wassail bowl in exchange for money or gifts. I see this as a “ye-olde harry-buffalo.” There also seems to be a lot of singing extortion going on several hundred years ago. According to the Oxford English Dictionary, the word “wassail” originated as a borrowing from the Old Norse salutation ves heill, corresponding to Old English hál wes þú or wes hál – literally meaning ‘be in good health’ or ‘be fortunate’. It was initially used in the sense of a greeting or saying goodbye. Modern wassail drink recipes include the base ingredient of apple cider but can include more exotic juices like pineapple and cranberry with an assortment of citrus fruits, cinnamon sticks, allspice, cloves, and other wintery spices.