“Once Upon A Mattress” Drama team brings classical musical to BHS

The Berthoud High School (BHS) drama program will present “Once Upon a Mattress” at the school’s auditorium March 7-9, at 7:30 p.m.

Chris and Cheryl Kouns, who have remained as the directors for the drama program for the last five years, note the spring musical is their biggest production in a number of different ways.

More students turned out for the auditions of “Once Upon a Mattress” than any other show the directors have presented at the high school in the past. The large cast will feature 32 students, as well as just under 10 working behind the scenes as part of the tech crew. 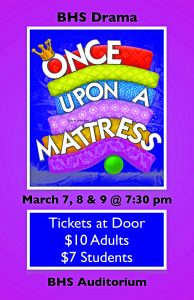 In addition to the large ensemble, the BHS version of “Once Upon a Mattress,” according to Chris Kouns, will feature the largest set-piece the directors have used since taking over the drama program in 2014. He noted the large number of parents who volunteered to help build the set, along with the cast and crew.

Though Chris and Cheryl have been known to do more serious productions in the past, this school year has been different in that the couple has stuck to “straight up comedies,” first with “Clue” in the fall, and now, “Once Upon a Mattress.”

Chris says part of the reason the drama team has experimented with different genres is because of the students and their willingness to try new things. It has provided the directors with an opportunity to get more daring as well.

“We have a great group of kids that have an excitement for [theater],” Kouns added. “This group is bold and willing to give everything a shot.”

“Once Upon a Mattress” first debuted on Broadway in the early-1960s. It has been around for a while and remains a popular choice for community theater groups and high school productions. According to Kouns, one of the reasons it remains so favored is that while there are still actors who take the lead in certain pieces, it also incorporates a lot of the cast in other numbers.

“Some of the biggest energy comes out of these large dance numbers that are at the beginning of the show, right before the first-act break,” Kouns explained. “It’s kind of a chance to really spread the wealth and have something for everybody to do and not just make the ensemble shrink into the background and become wallpaper.”

Audiences, whether familiar or new to the musical, can expect the classic “happily ever after” fairytale yet flipped into a full-fledged comedy. The original Broadway show was the breakthrough for Carol Burnett, and features much of her famous style of comedy.

The BHS show will once again utilize the talents of Hannah Finch, the choreographer, who has worked with this group of students in the past on other Berthoud musicals. Scott Kassner will serve as the music director. The Kouns shared high praises for both and how they’ve been able to stretch the individual talents further than even the students realized they could go.

Support local theater as the BHS drama team presents “Once Upon a Mattress” March 7-9, at 7:30 p.m. The show will take place in the high school auditorium. Tickets are $10 for adults and $7 for students.