The Berthoud Board of Trustees voted to affirm a motion directing town staff to continue researching a proposal which, if later approved by the board, could provide the means for the town to build a community facility.

An information sheet regarding the issue states, “One of the sometimes misunderstood elements of the discussions has been an amount of direct funding available to the town from a trust account should the town have a facility under design and moving toward a construction phase before the end of this year (December 2017). The amount of funding available is $500,000, which is not a great amount of money if we were building a $25- to $30- million facility, but it is a good deal of money if it were used as matching funds to secure additional grant funds ranging from $500,000 to $1,000,000 dollars which were utilized to construct a facility costing less than $6 million. After December of this year, the Trust is directed to award the $500,000 to another recipient if Berthoud has not actively begun the construction of a facility.” 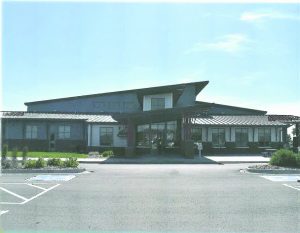 The document goes on to explain other players have recently stepped forward and indicated an interest in providing financial support for a community facility, a local financial institution has offered to enter into a lease-purchase agreement to provide “gap funding necessary to construct a facility of moderate size and cost.”

According to the information sheet, “The constraint at this point is the grant process and the fact that we are almost out of time to submit an application to DOLA for grants to assist the town with the construction cost. A grant would have to be submitted in late July, only a little over a month from now, to get the project into the fall grant cycle. To submit a grant for serious consideration a substantial amount of design and cost estimating has to be completed in advance, or the project will likely never be given consideration given the fierce competition for these dollars. At staff’s suggestion, the Thompson Valley Recreation District was contacted to see if they could help Berthoud in any fashion should we desire to construct a facility such as the new Center they have recently built in Milliken. Not only did they willingly agree to help Berthoud; they have given Berthoud a complete set of design and construction drawings for their facility. It is important to note that this facility did successfully compete for DOLA grant funds less than 2 years ago and was awarded $2 million.”

Discussion centered on the process used by town staff in what appeared to be an attempt to rush the proposal past the Parks, Open Space and Recreational Trails (PORT) committee without input from the committee. Trustee Chris Buckridge stated he did not see a down side to the proposal. Either the board gives town staff direction to pursue the idea to see if it could possibly meet the town’s current needs or the board turns down the idea, does nothing, and assures any grant monies are awarded to another community.

The board, by a vote of 4 to 3, directed staff to continue researching the proposal and report the findings to the trustees. Trustees Hindman, Brian Laak and Will Karspeck voted “No.”

Following the vote Town Administrator Mike Hart stated, “Staff did not create these deadlines; staff didn’t put you into a pickle to make a quick decision. Aug. 1 is a deadline set by the state. The opportunity just popped up. This is not a decision that town staff should make … this is an option I felt the board should make the decision. The timeframe, even though tight, is not something created by staff, it is just the way it rolls.”

The board approved a policy concerning the spraying (fogging) of adult mosquitos in town. Per the policy statement adopted, the town has contracted with Colorado State University to test mosquitos captured in the four traps deployed by the town for West Nile Virus. Parks and Recreation Director Jeremy Olinger, who introduced the topic, stated that based on the results of the tests a vector index of .5 or higher would “trigger” a fogging program for the town.

Olinger reported the cost for the mosquito testing is $7,545 annually.

The trustees took public comment from a contingent of citizens who had previously advocated an absolute town ban on spraying (fogging) of adult mosquitos, and rely on a larvicide program to control the population of mosquitos. Four citizens of the town stood at the podium and addressed the board. Common complaints by the speakers were a lack of communication regarding a fogging operation carried out by the town last year, and the desire to raise the vector index to .75.

After much discussion and input from Darrick Turner, a senior environmental health specialist for the Larimer County Department of health and Environment, and Broox Boze, operations manager for Vector Disease Control International, some minor changes were made to Resolution 6-17 and to the Emergency Adult Mosquito Control Policy the board approved the documents, as amended, by a vote of 6 to 1 with Trustee Jeff Hindman casting the “No” vote.

The board unanimously accepted the results of the audit for 2016.