Weekends in Berthoud High School’s (BHS) gymnasiums are usually reserved for basketball, wrestling, or volleyball. But last Saturday a low robotic hum along with crashing plastic and metal objects filled the air. 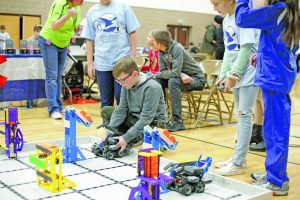 Photo by Will Cornelius – A participant readies his robot just before a competition at Berthoud High School.

The VEX Robotics Competition held a tournament hosted by Berthoud Robotics at BHS on Saturday that saw elementary, middle and high school students compete over who had the best robot. But what makes the best robot?

Robotic competitions involve creating machines capable of completing tasks or overcoming obstacles. It’s not necessarily the fastest or strongest robot, but the one that can complete a set of tasks most efficiently.

“Try it, fix it, try it again, fix it. They do that for a while. The robots definitely get better as the year progresses. So, a good robot today, will be a terrible robot in February,” said Kurt Worrell, president of Berthoud Robotics. One of the unique parts of robotics is how the teams progress throughout the year and even throughout the tournament. Teams will tinker and adjust their robot between matches on the same day for better results.

The robots ‘compete’ with the help of their human creators to score more points than the other team. Points are scored in various ways, but the competition is re-designed each year so that teams must start from scratch to solve new puzzles. The VEX Robotics Competition has two divisions, one for grades 4 to 8 and another one for grades 6 to 12.

The younger kids compete with one robot in a six-by-eight-foot walled rectangle. Within the rectangle are 2.5-inch orange discs — like small hockey pucks — that the robots try and move from one side to the other. But there are a few twists.

The orange discs are held in small towers that either need to be lifted, pushed or spun to release the discs. Releasing the discs awards the team points, but the real value is in moving the discs to the other side.

Again, there is another obstacle, the discs need to be shoved or shot under a barrier. Depending on where the discs land on the other side, the team gets even more points. The puzzle is figuring out how to create a robot to do all this.

One of those teams trying to figure that out is the Banananators. Making their first robotics tournament appearance, the team was decked out in bright yellow t-shirts for their first tournament. For them, the goal was just to have their robot get the discs out of the tower and have fun.

There were robots with arms that could push levers to release the discs, others had conveyor belts to load the discs directly onto the robot. Some could even fire the discs out like an air hockey player. While some robots were better than others, no one robot was adept at everything.

For creative kids that like to figure things out on their own, robotics is a great opportunity. The robots must be designed and created by kids on the team, with no adult input. “[With] the judging and refereeing, we make sure that the team members’ skills match the robot that they can build,” said Worrell.

Teams are also required to keep an engineering notebook. “If I took the notebook, I should be able to rebuild your robot,” said Worrell. This helps teams design and improve on their robot, while also ensuring that the kids aren’t using adult help. “It forces them into a design flow. ‘We’re going to dream about things, brainstorm, we’re going to try a couple of things, prototypes’,” Worrell continued. 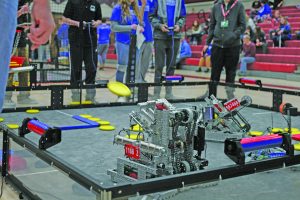 Photo by Will Cornelius – A robot from the upper division flings a yellow disc at the goal.

In the higher division, teams use more advanced techniques for a more difficult robotic competition. “They can cut [metal], they can melt plastic, they can do all kinds of stuff. Just no welding,” said Worrell.

The teenagers face off with two robots per team. One robot flings 5.5-inch rigid yellow discs at an elevated frisbee golf goal, while the other rebounds missed shots. The other team is also doing this while competing for a limited number of yellow discs. Calling it robot basketball isn’t too far-fetched.

“It’s hard to pick them up because they don’t want to bend. Lotta things get jammed up,” said Worrell while explaining the difficulty in creating a robot to pick up flat discs off the ground.

Turnout for the VEX robotics tournament was strong with teams even making the trip from Wyoming. “A good turnout, 32 teams on the other side, and 27 over here. Not the biggest tournament we’ve ever had, but it’s close,” said Worrell.

The event on Saturday had six teams from Berthoud in the younger division and three in the older division. To find out more about Berthoud Robotics visit www.berthoudrobotics.or